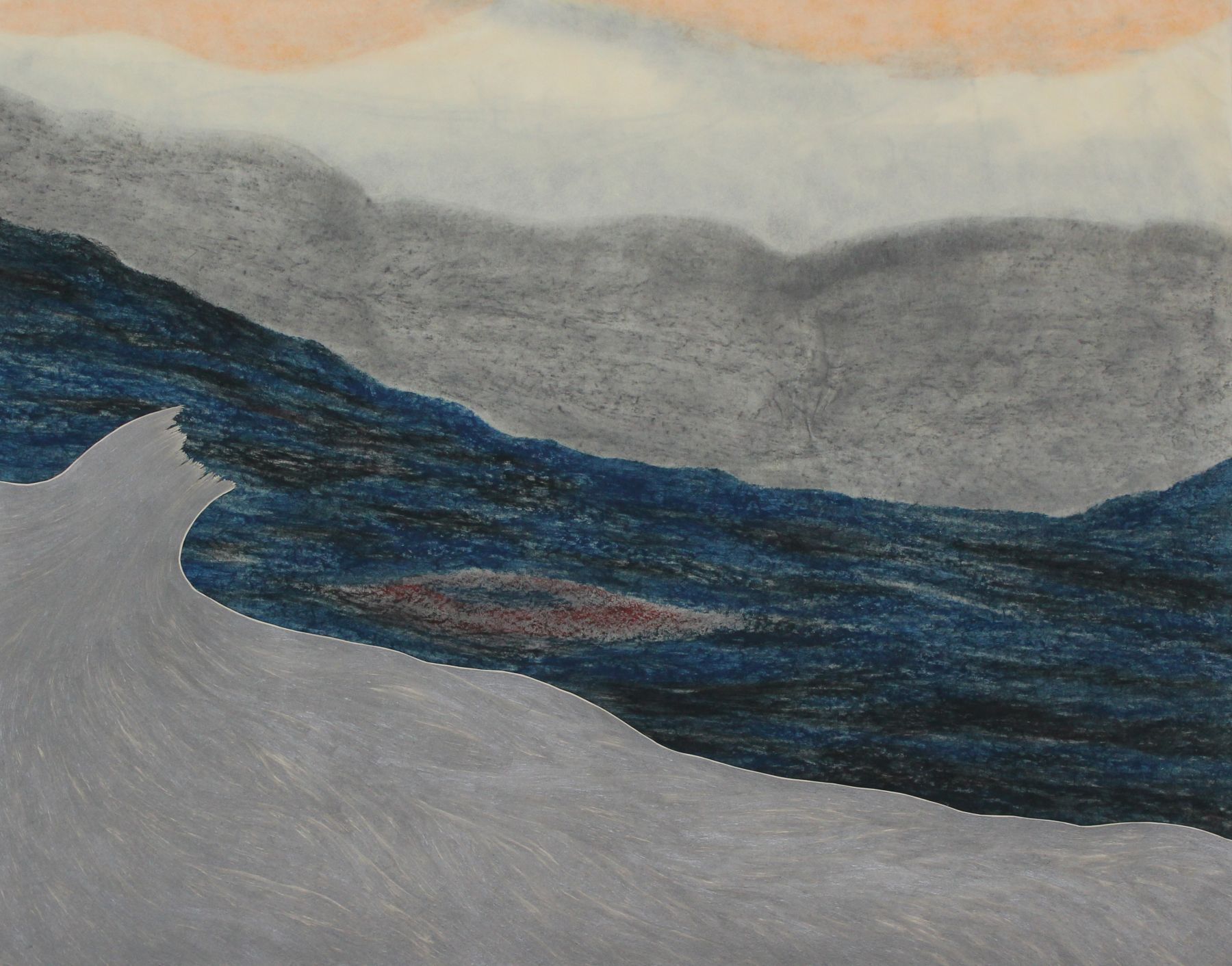 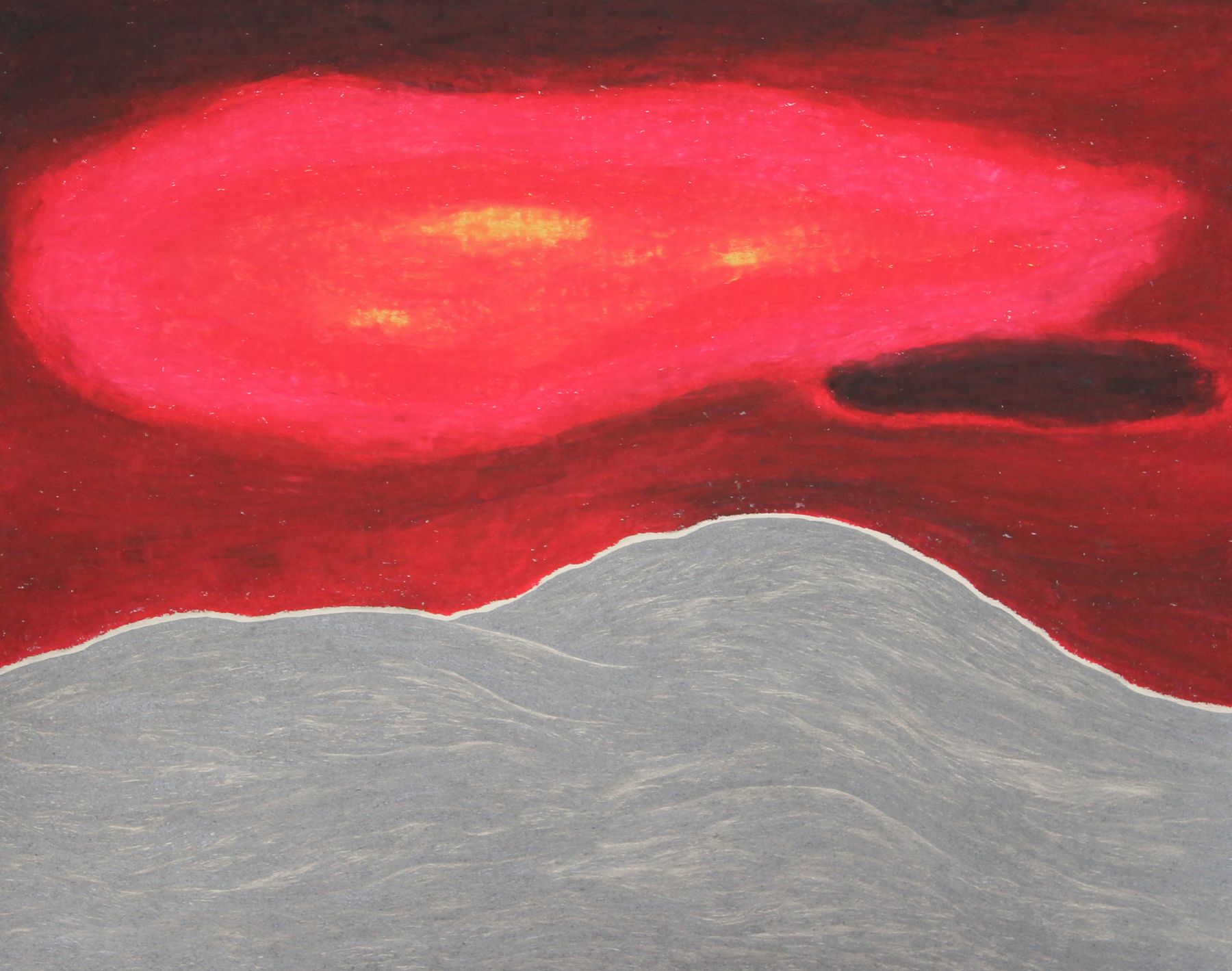 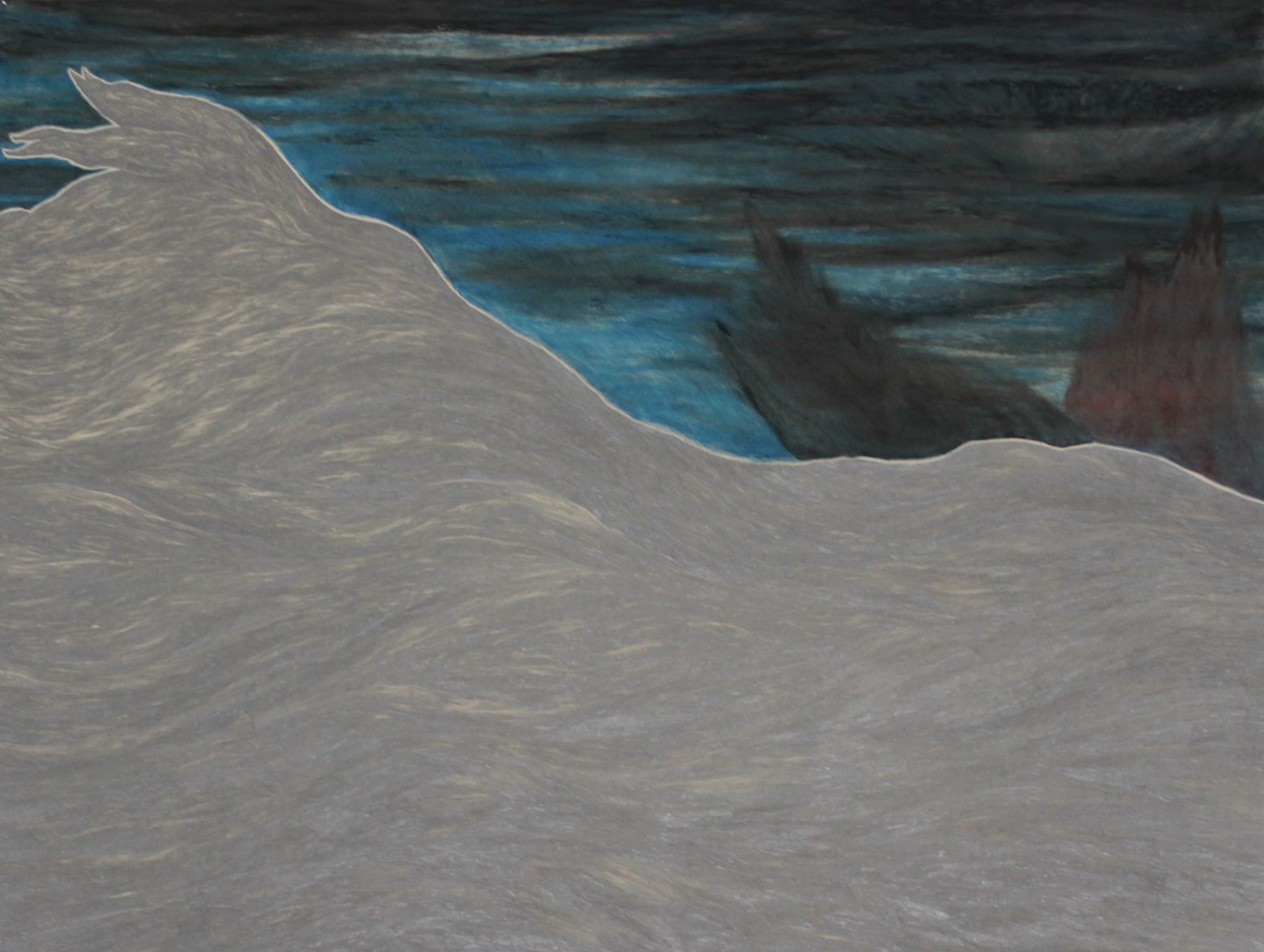 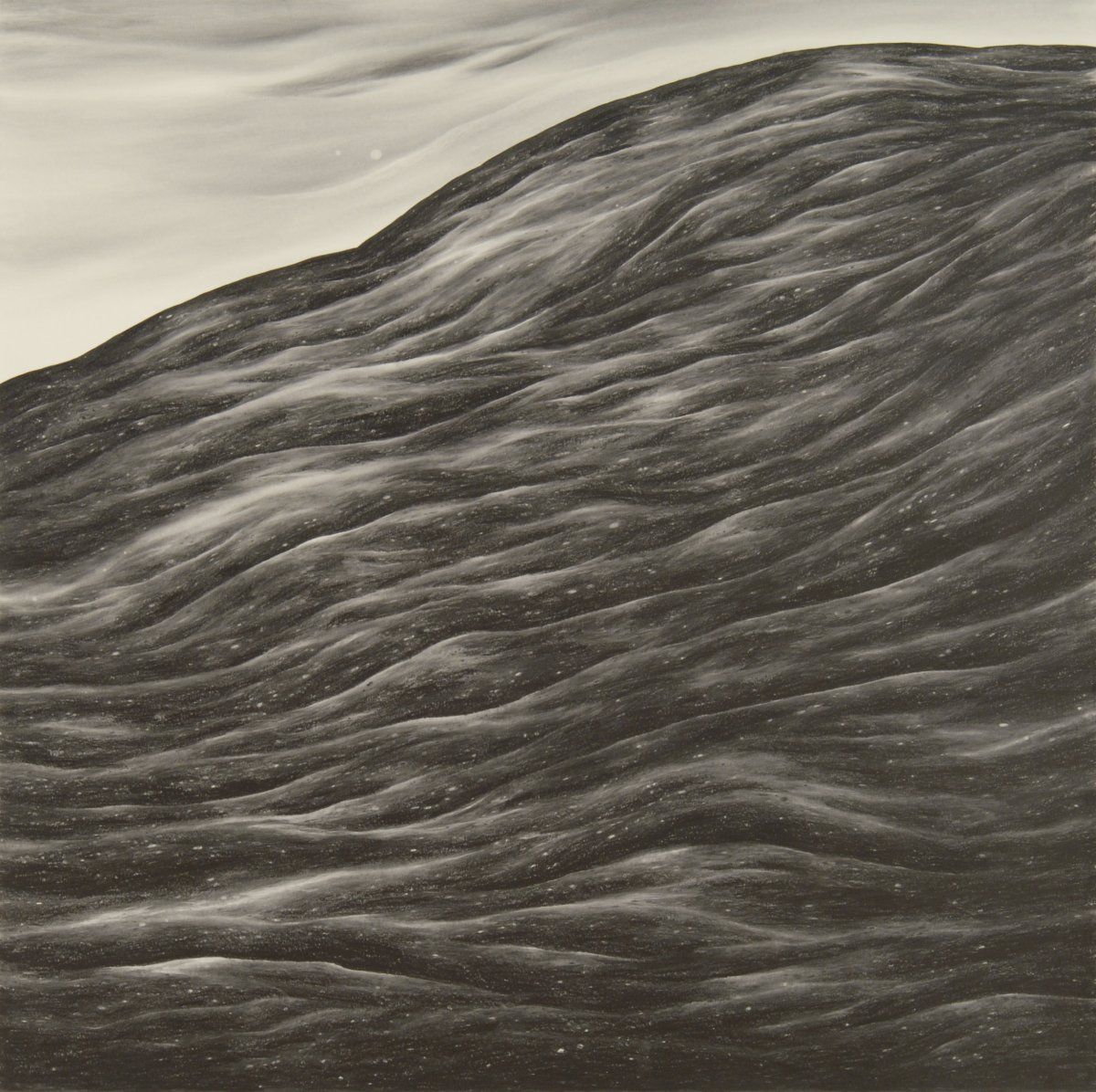 Robyn O’Neil
Something Vanished Over Paradise, 2009
Graphite on paper
60h x 60w in 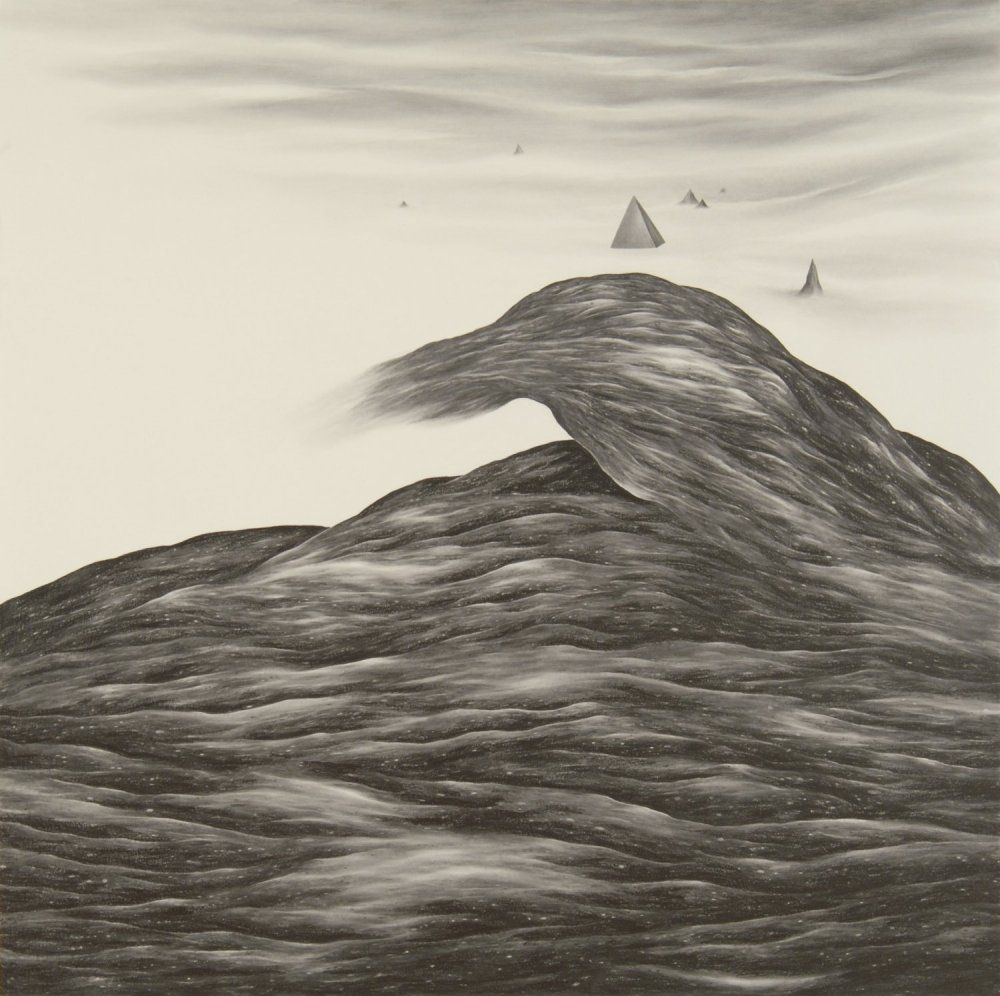 Born 1977 in Omaha, Nebraska, Robyn O’Neil received her B.F.A. degree from Texas A&M Commerce and her M.F.A. degree from the University of Illinois, Chicago. She currently lives and works in Seattle, Washington. Robyn O’Neil’s signature monochromatic graphite drawings range from intimate landscapes to large-scale, multi-panel works. Often surreal or symbolic, her drawings reference personal narratives and art historical allusions, dealing with themes of memory and self-identity. The artist’s vision-like drawings recall forces beyond our control, represented in awe-inspiring landscapes with gnarled trees, sinuous waves, dramatic mountain ranges, and ominous skies. Amid the feeling of mystery in O’Neil’s work is her playfulness, both with language and form. Inspired by a vast array of sources from Mayan creation myths to pre-Renaissance symbolism, O’Neil depicts a world of her own, one that is charged with an intense energy and sense of possibility. The artist’s work speaks to the human condition, and the disquiet coexistence of apprehension and hope.

O’Neil has been the subject of solo exhibitions at major institutions, including at the Contemporary Arts Museum, Houston; the Herbert F. Johnson Museum of Art at Cornell University in Ithaca, New York; the Sheldon Museum of Art, Lincoln, Nebraska; and the Frye Art Museum in Seattle, Washington. In fall 2019, the Modern Art Museum of Fort Worth will present a twenty-year survey featuring the artist’s acclaimed film, WE, THE MASSES, which she conceived of at Werner Herzog’s Rogue Film School in Los Angeles. She has been included in many prestigious group museum exhibitions, including the 2004 Whitney Biennial. Her work can be found in the permanent collections of the Dallas Museum of Art, Dallas, Texas; Whitney Museum of American Art, New York; Blanton Museum of Art, Austin, Texas; Museum of Fine Arts, Houston, Texas; the Modern Art Museum of Fort Worth; Philadelphia Museum of Art, Pennsylvania; and the Herbert F. Johnson Museum of Art, Cornell University, Ithaca, New York. Further, O’Neil is the recipient of numerous prestigious awards, including a Joan Mitchell Foundation Grant, an Artadia grant, and the Hunting Prize. She also hosts the popular podcast, “Me Reading Stuff.” 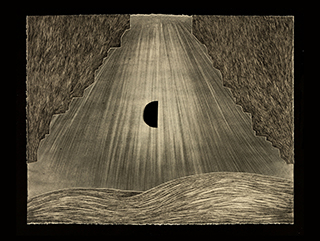 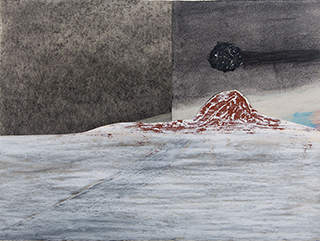 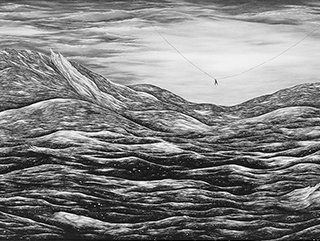 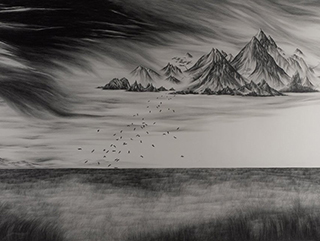 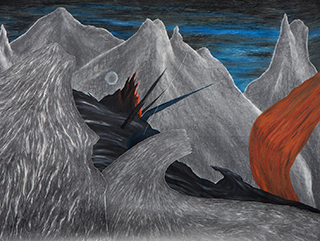 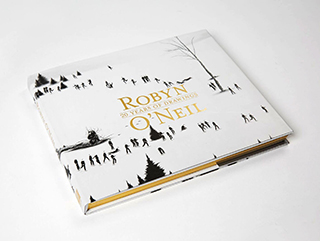 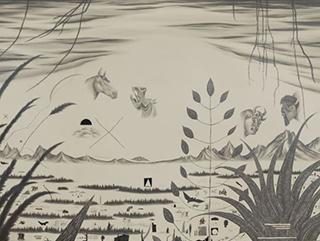 “When the cover of a book becomes postcard art: captivating messages in surprising packages”
by Leah Ollman
August 3, 2018 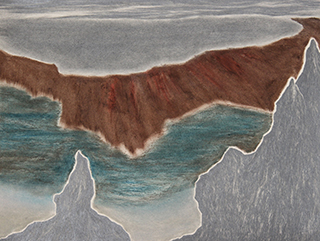