The Journey to Me 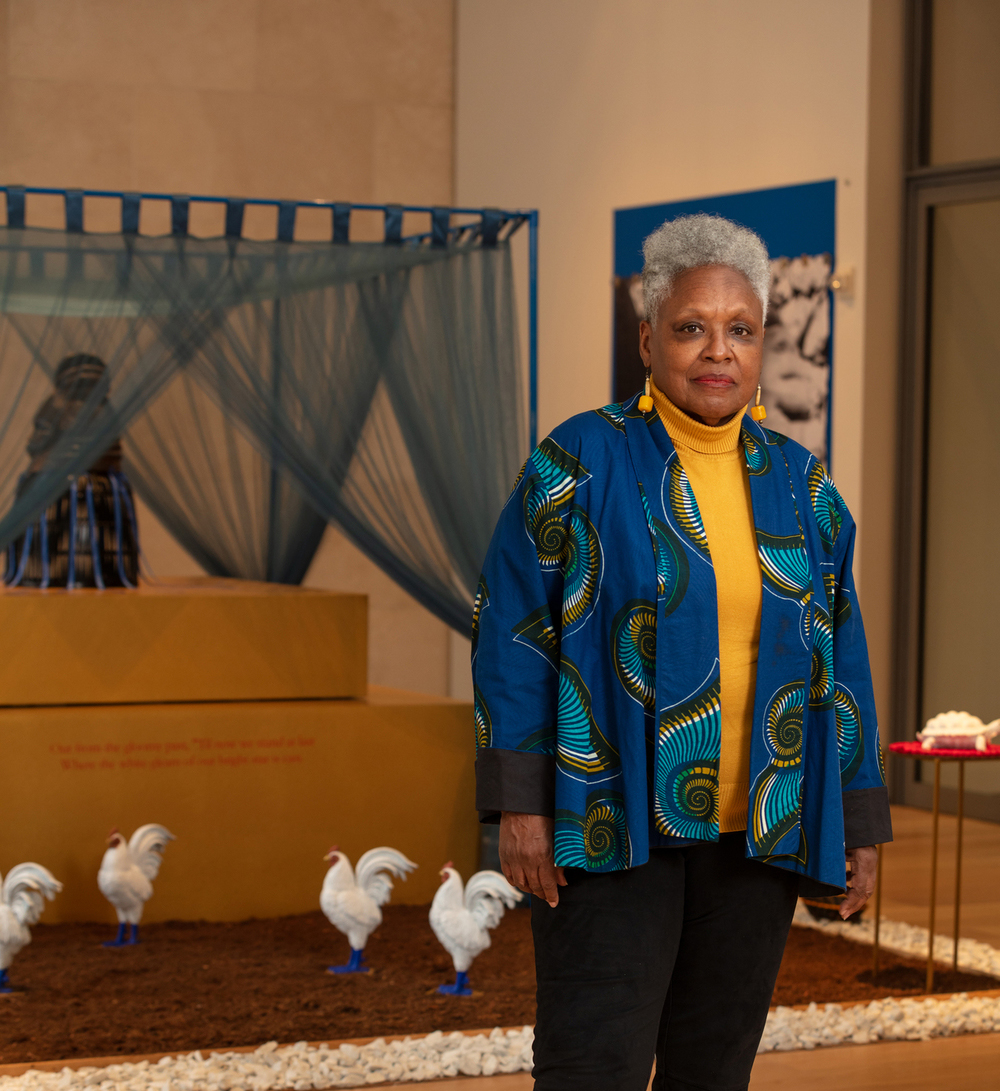 Heartfelt congratulations to Vicki Meek, Art League Houston’s 2021 Texas Artist of the Year. A renowned artist, curator, writer, organizer and arts advocate, Meek embodies the ethos of the Texas Artist of the Year award in her steadfast art practice and devoted support of the arts over the past four decades. The award recognizes Meek’s exceptional creativity and outstanding achievement for her multimedia and interdisciplinary practice that focuses on cultural memory, identity, and social issues in the African diaspora. The artist’s practice, emphasizing hope found in collective healing, has and continues to have a significant and positive impact on contemporary visual art in Texas. With this honor, Meek joins the distinguished ranks of artists who “stand apart as leading figures and visionary talents within the field of contemporary art in Texas.”

Meek’s award will be further commemorated in the exhibition at Art League Houston, The Journey to Me, which thematically visualizes the development of the artist’s practice through three site-specific installations extending throughout the ALH galleries. Employing sculpture, printmaking, and technology, among other media, the exhibition will cite the artist’s major influences such as references to Meek’s late mentor Elizabeth Catlett and African cosmology and spiritual practices. Meek states, “I want people to start thinking about the Black community in the affirmative. We didn’t just survive. We thrived in spite of everything.” This sense of hopefulness is highlighted throughout much of Meek’s practice, which prioritizes and supports too frequently forgotten, left behind histories and identities.

In conjunction with the exhibition, Art League Houston is publishing a catalogue, Vicki Meek: Installation as Social Commentary.

To purchase the catalogue, see here.

To learn more about the exhibition, see here. 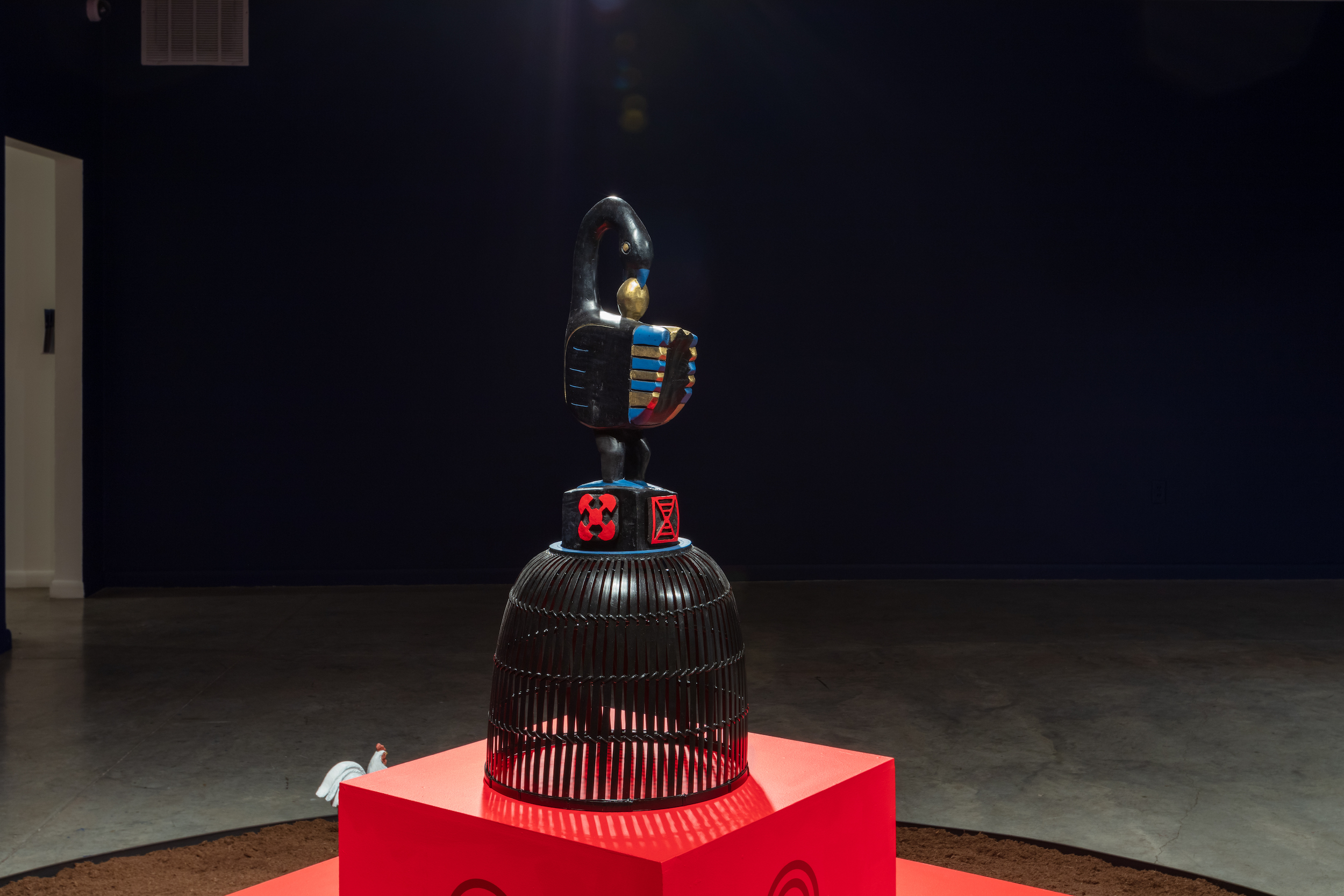 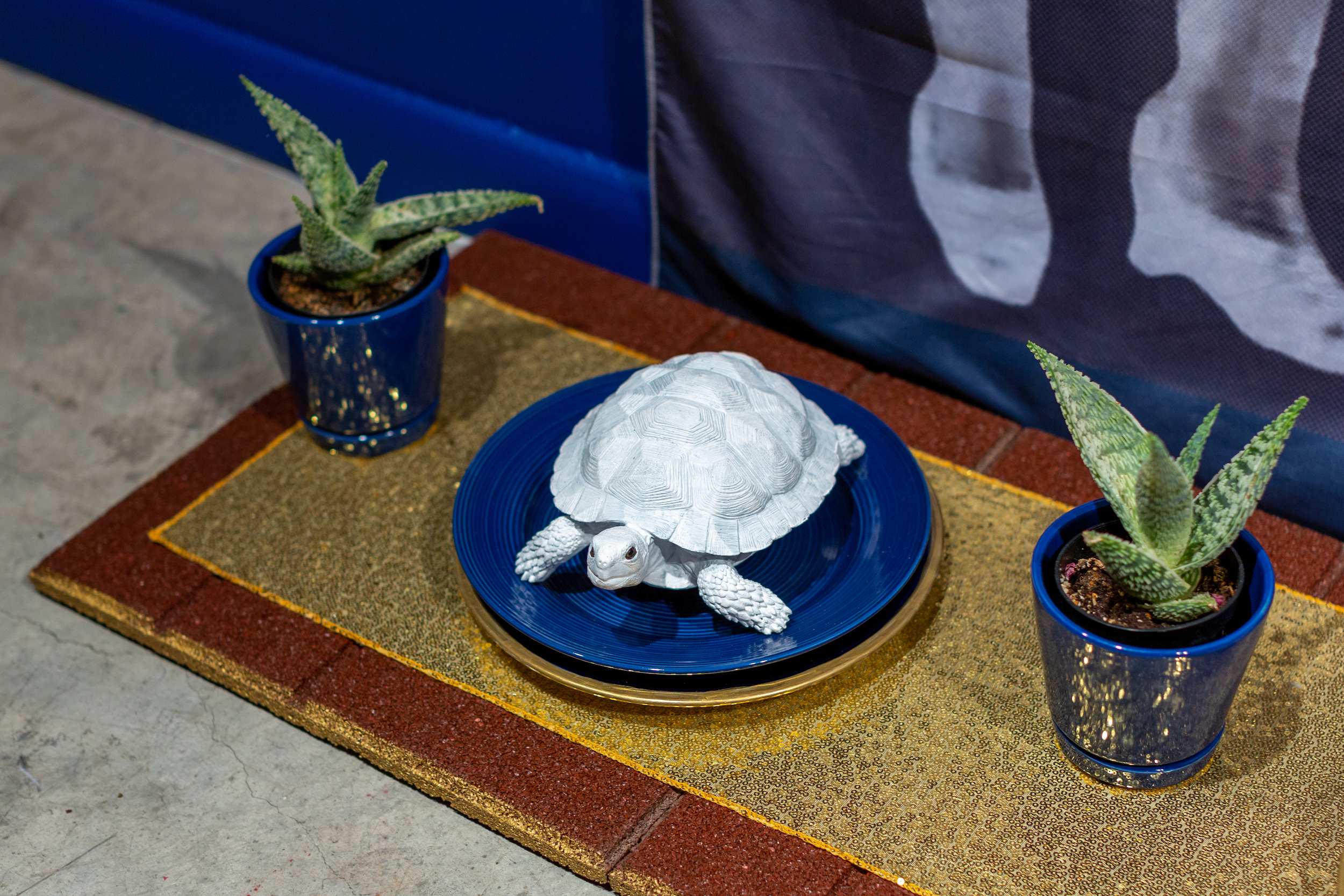 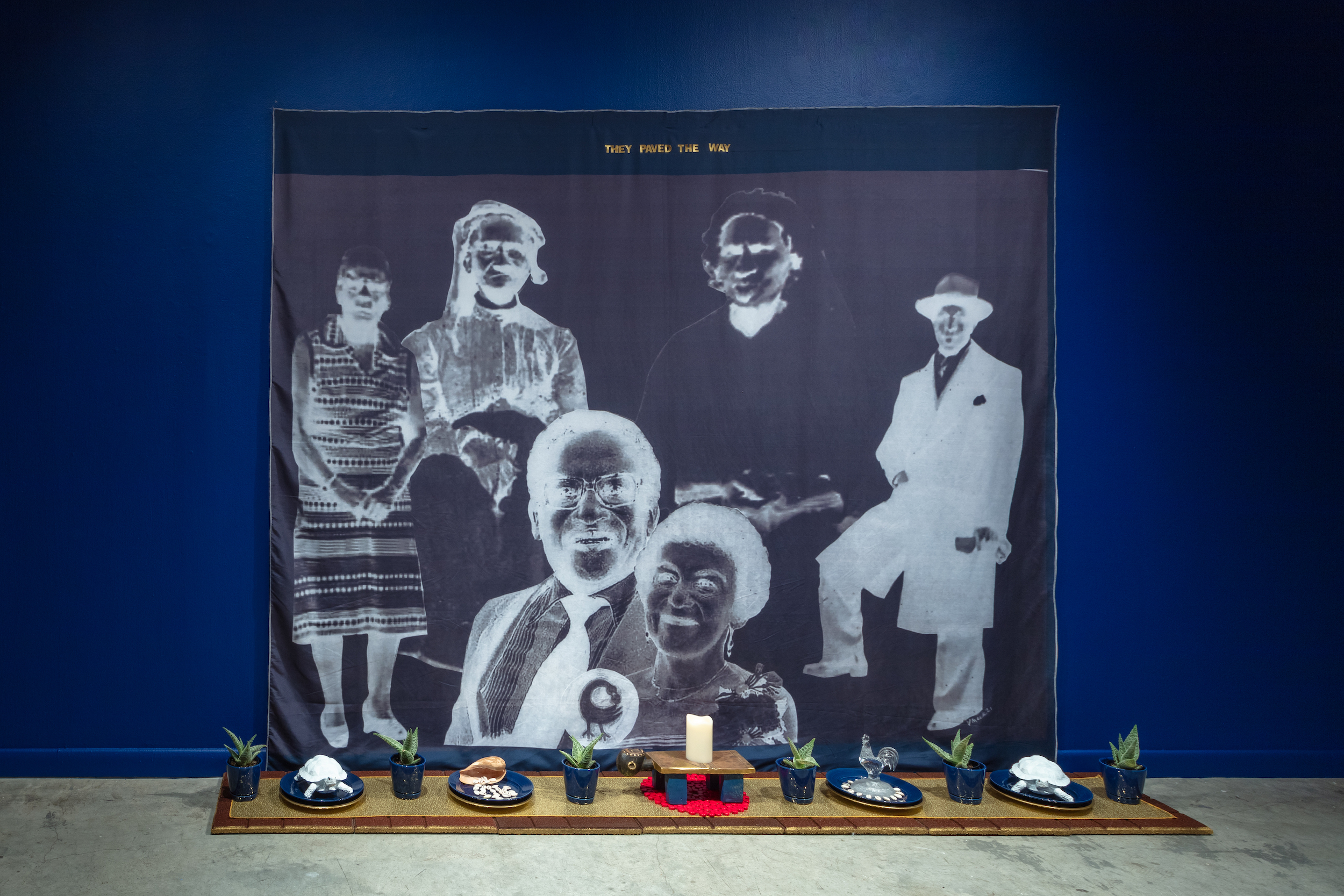 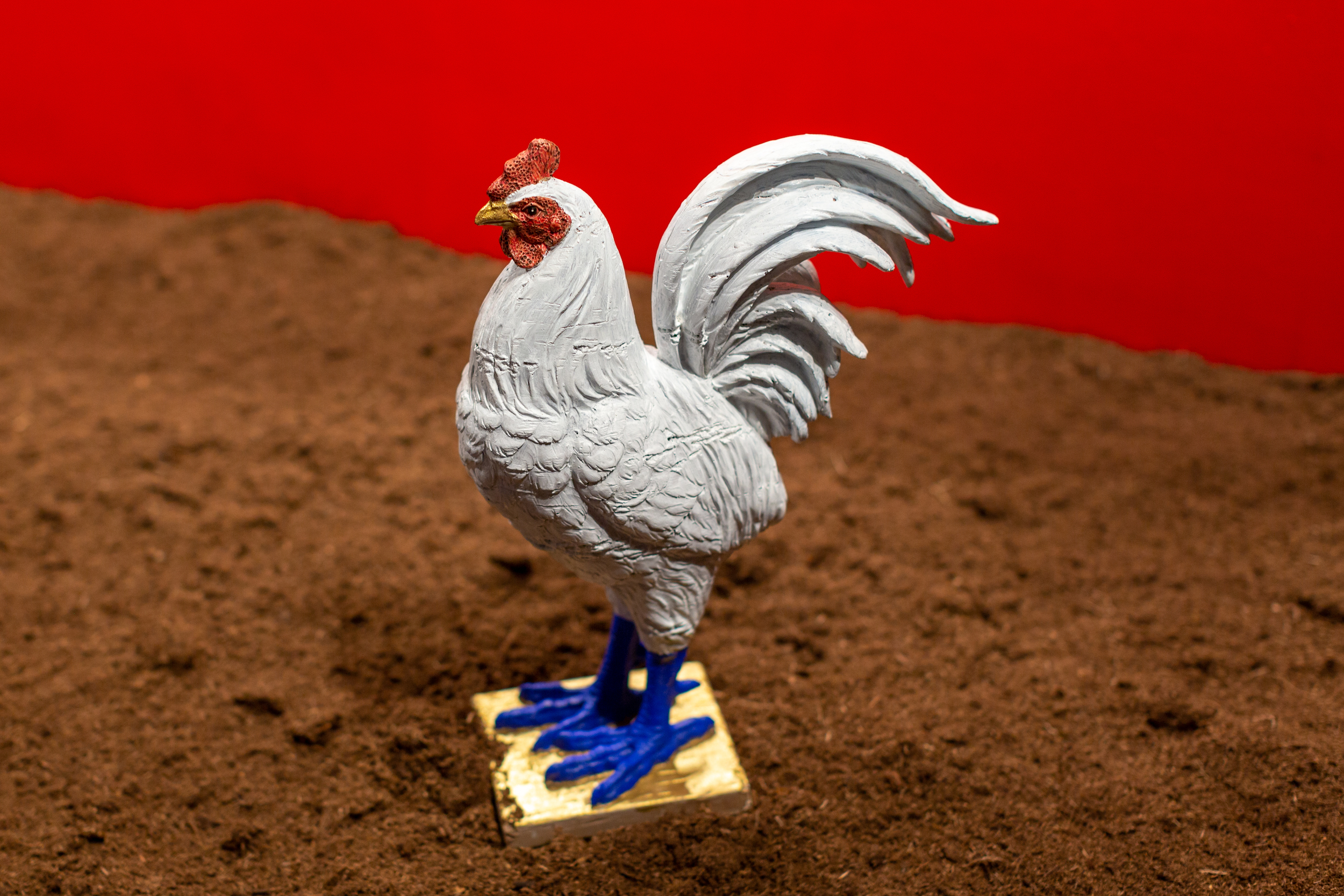 “As an artist obtaining a Master of Fine Arts at the height of the Black Power Movement, it is not surprising that my work embraces a political outlook, especially given that my artistic idols are Elizabeth Catlett, Jacob Lawrence and Romare Bearden. The aesthetic I developed includes both the notion of utilizing text and symbolism derived from West Africa and other parts of the African diaspora, while striving to educate the viewer on lost history and social issues. I’ve explored imagery that is not rooted in polemics, but that prompts dialogue around cultural memory and identity.

My choice to create a three-gallery installation for my Texas Artist of the Year exhibition was one that I hope provides a summary of my artistic and aesthetic development. I have been working in the medium of installation for over 40 years and in that time have seen my practice grow in many ways. What started as an overt exploration of sociopolitical circumstances confronting African people worldwide that were more generic than personal, took a decidedly spiritual turn after the birth of my children. 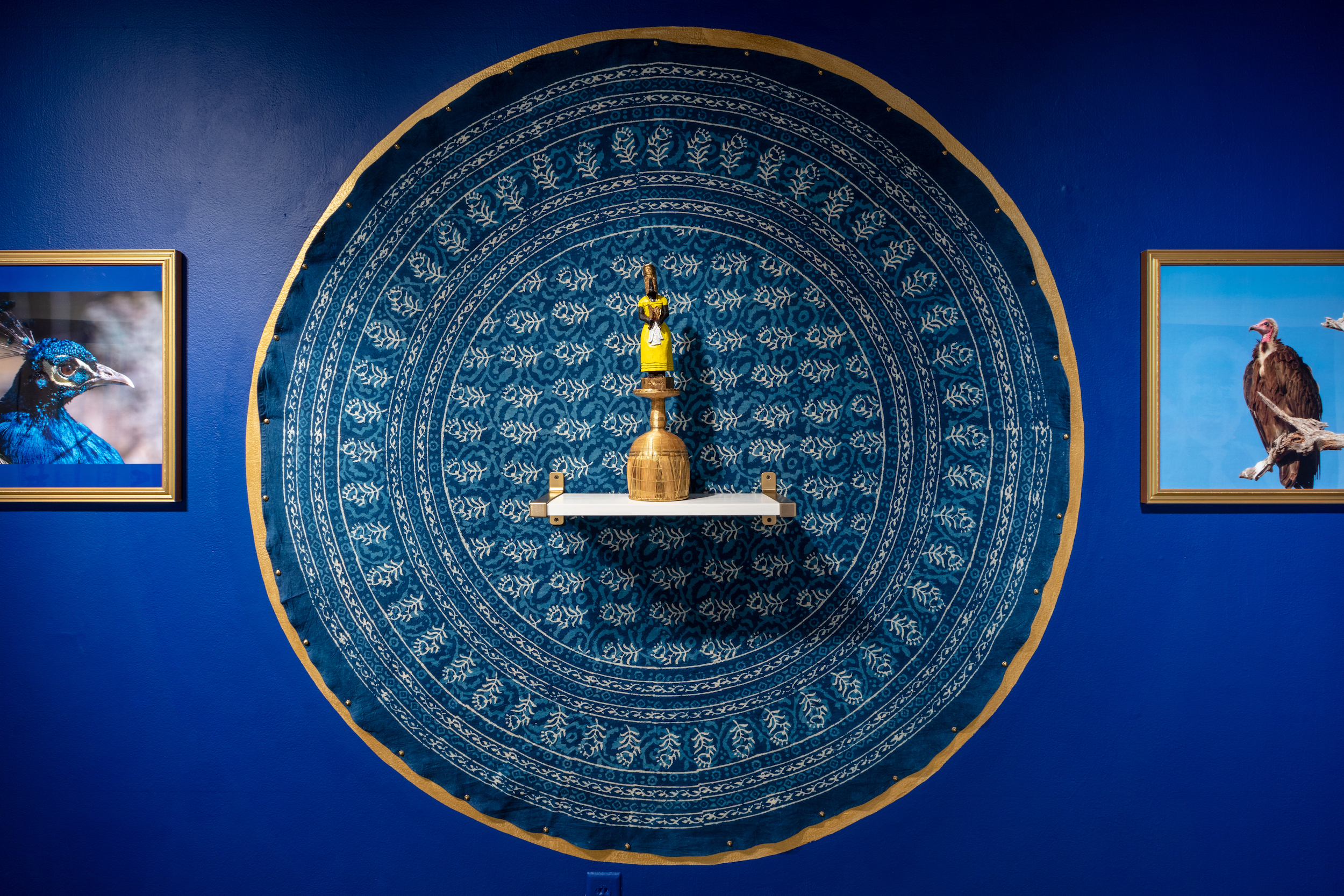 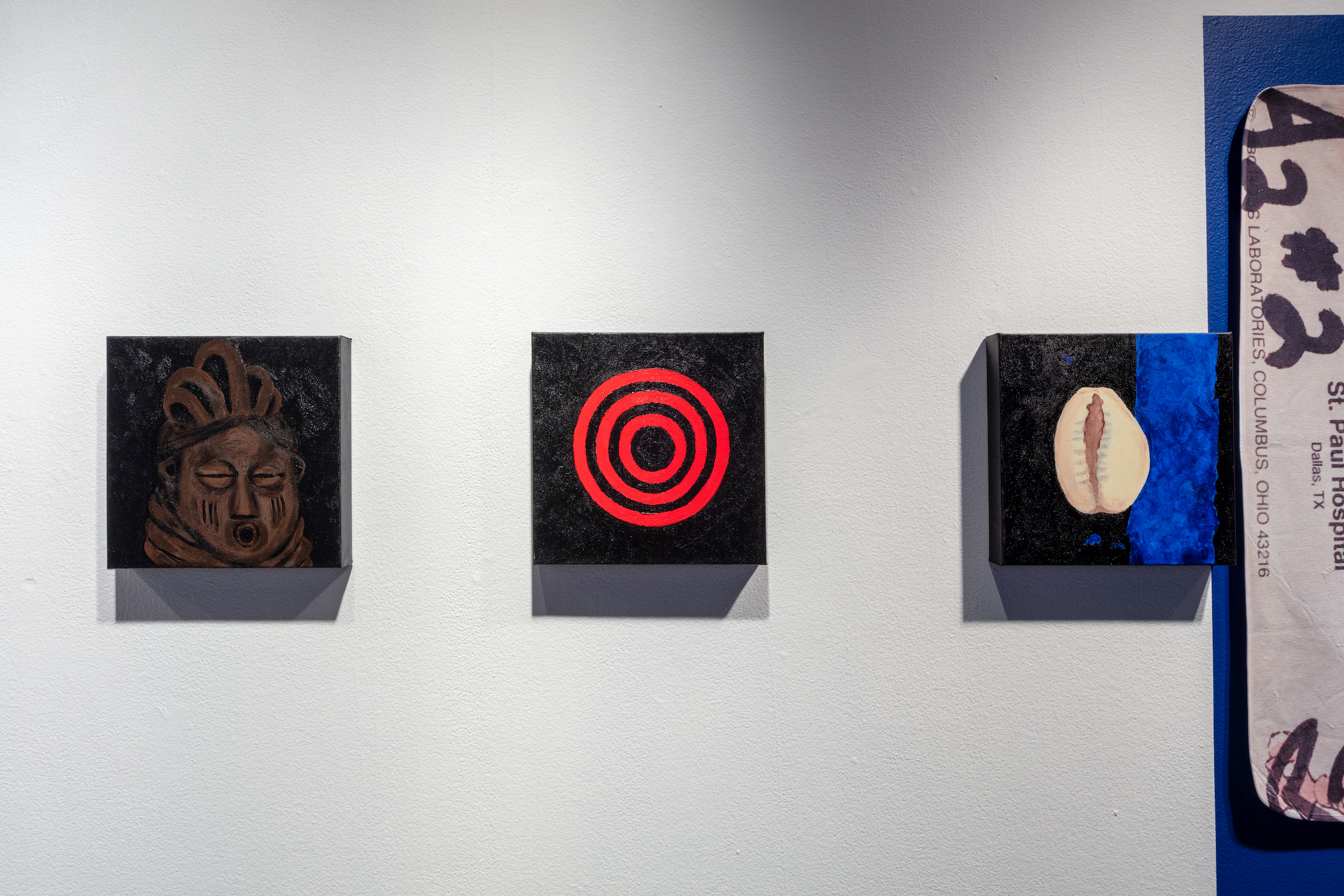 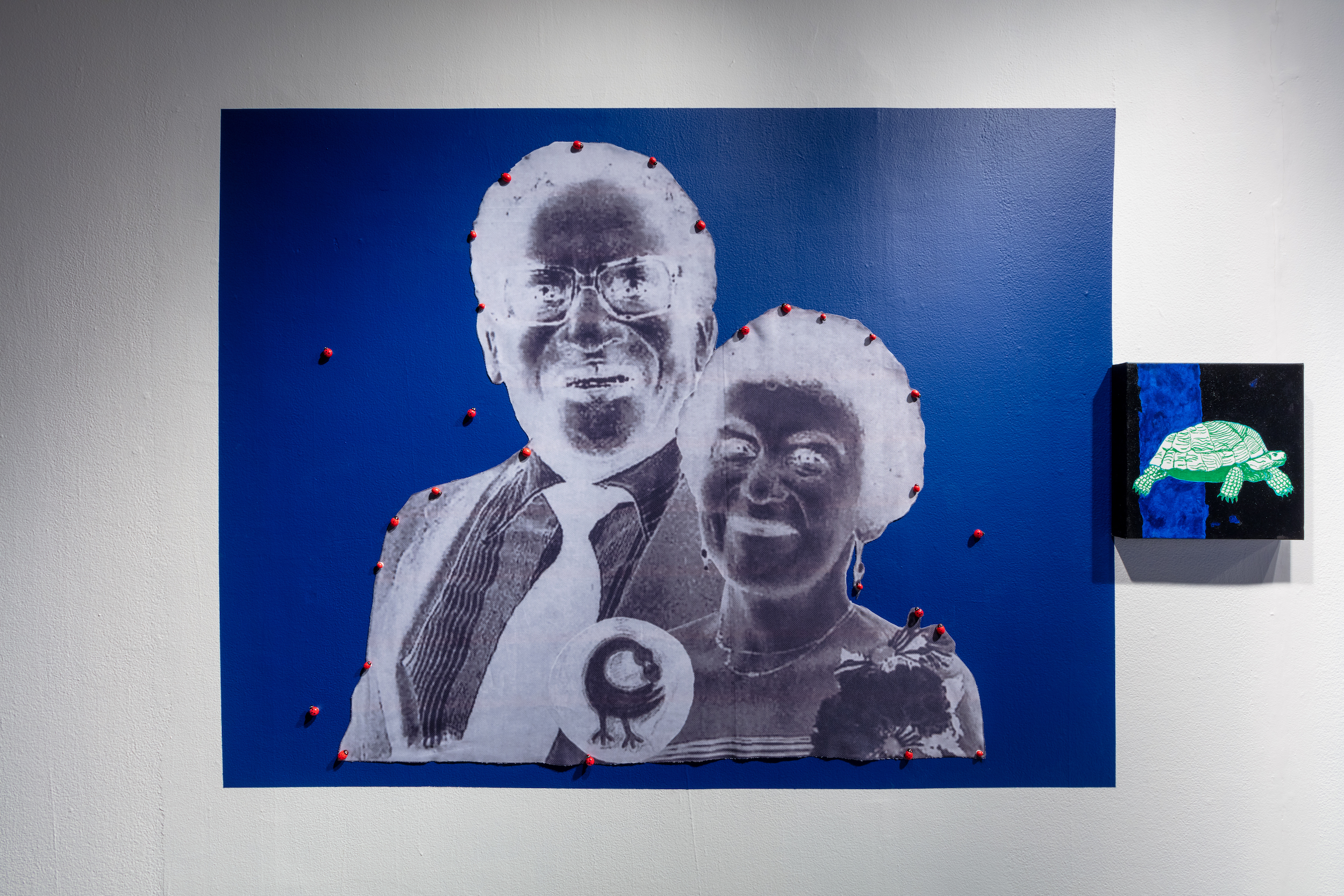 I was raised on the artwork created by the late artist Elizabeth Catlett (Mora), an artist who never shied away from the difficult issues around race and gender. Much of my early work embraced her philosophy on the role of the artist in society, so likewise, it tackled similar issues. The Main Gallery installation at ALH reimagines twenty of Catlett’s most iconic political artworks, along with her voice and my singing.

As one moves into the Hallway Gallery space, the installation begins to chronicle my shift to exploring the sociopolitical through a spiritual lens, using African cosmology and spiritual ritual. Typically, prior to becoming a mother, I used the connection to history and memory as the inspiration for my work. With The Journey to Me, I continue doing this, only this time using my personal history & memory.  My take on this shift is that motherhood humanized me in ways I could not have imagined!

The Front Gallery is the culminating installation and pays homage to four generations of my ancestry. Here I get to acknowledge my real foundation as both a woman and an artist: those ancestors upon whose shoulders I stand today, rooted in the history of Black Africa that was transplanted in America.” 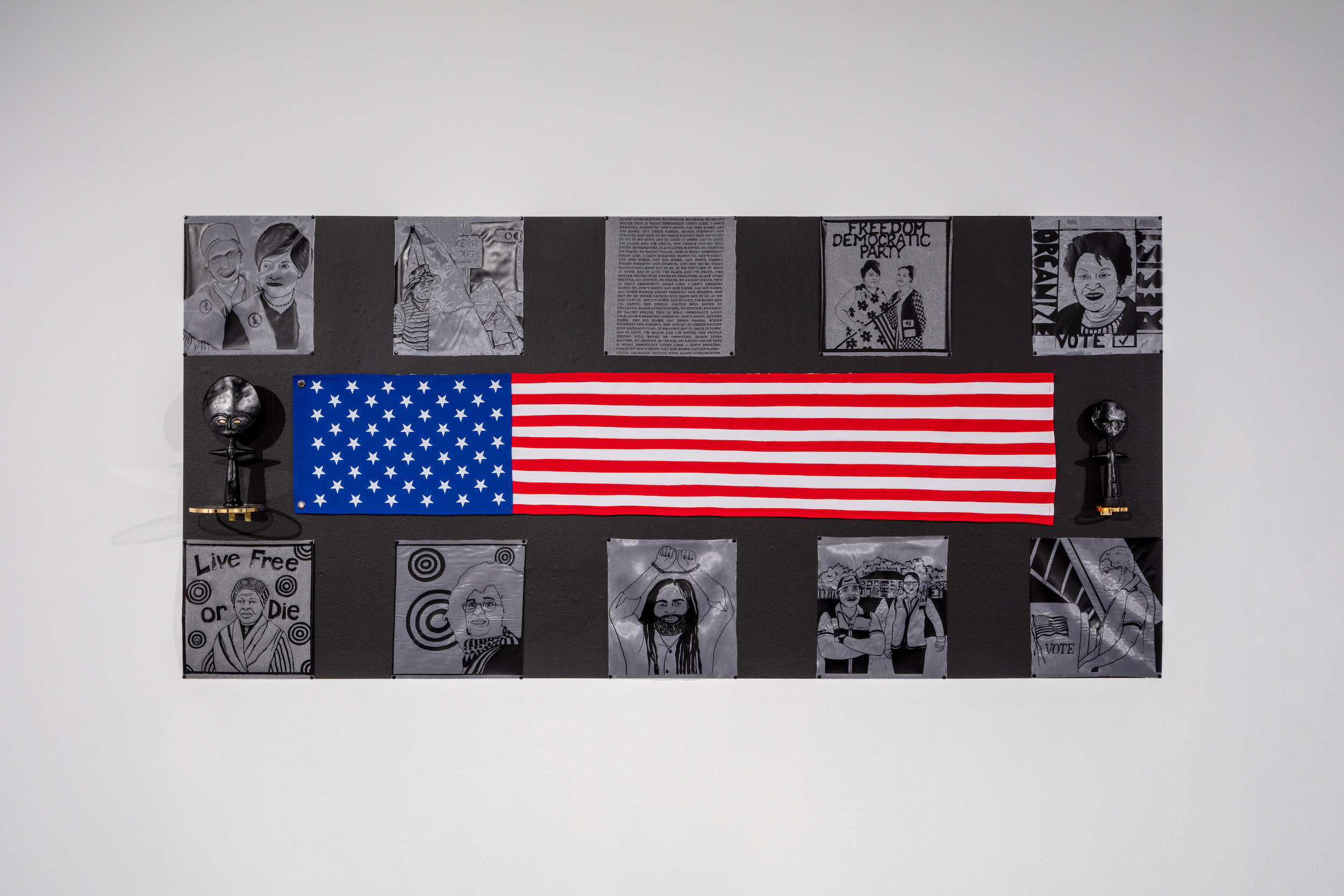 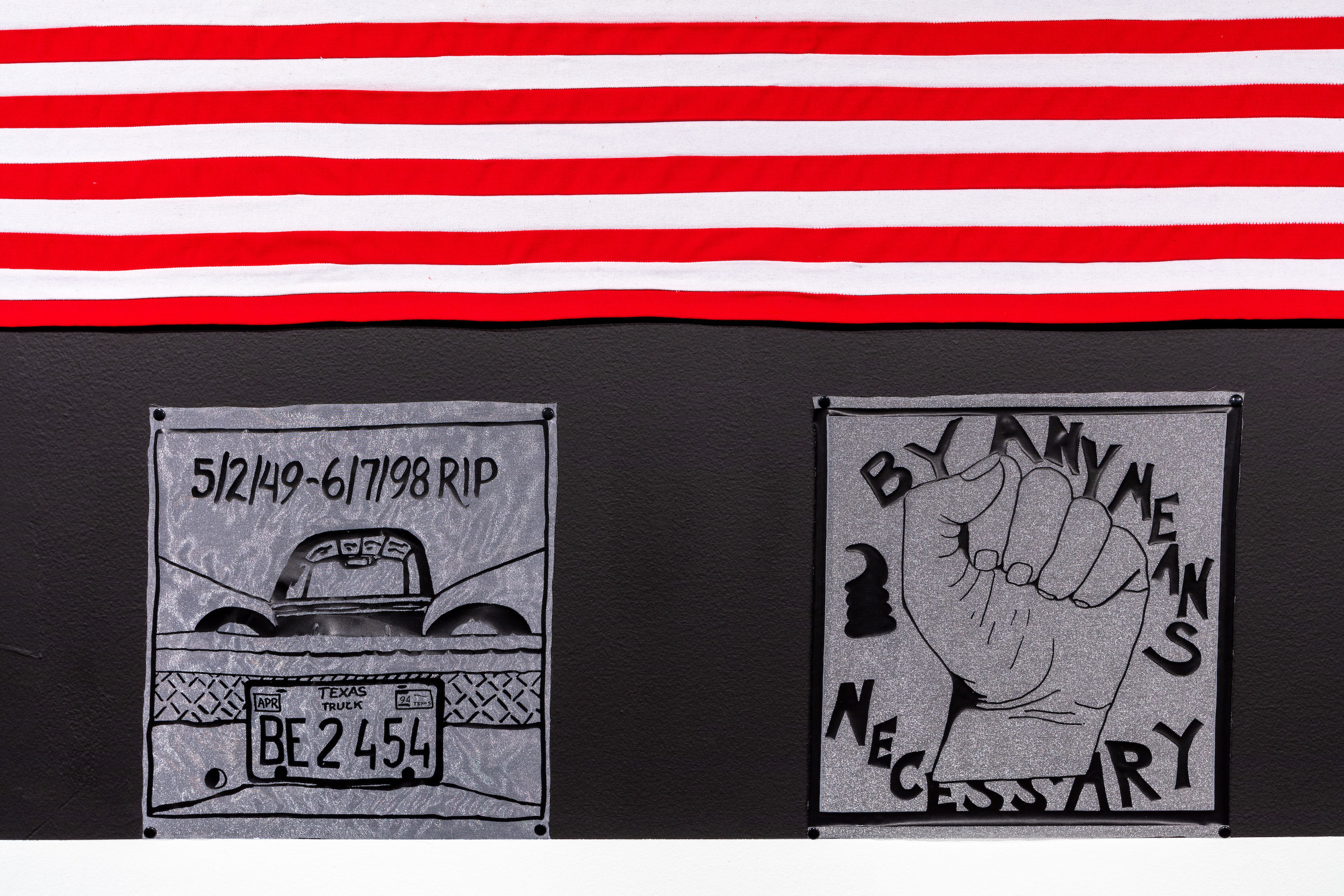 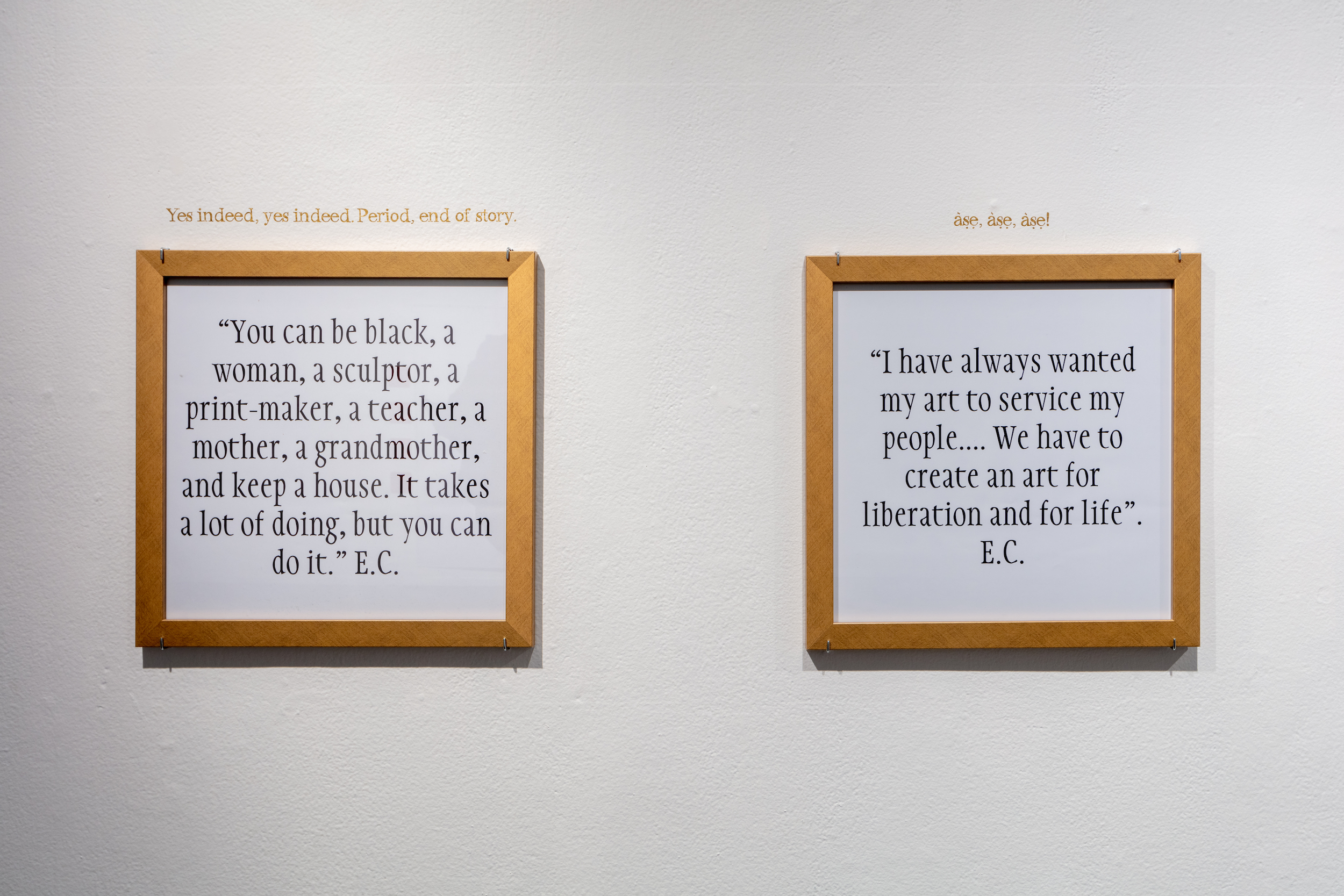 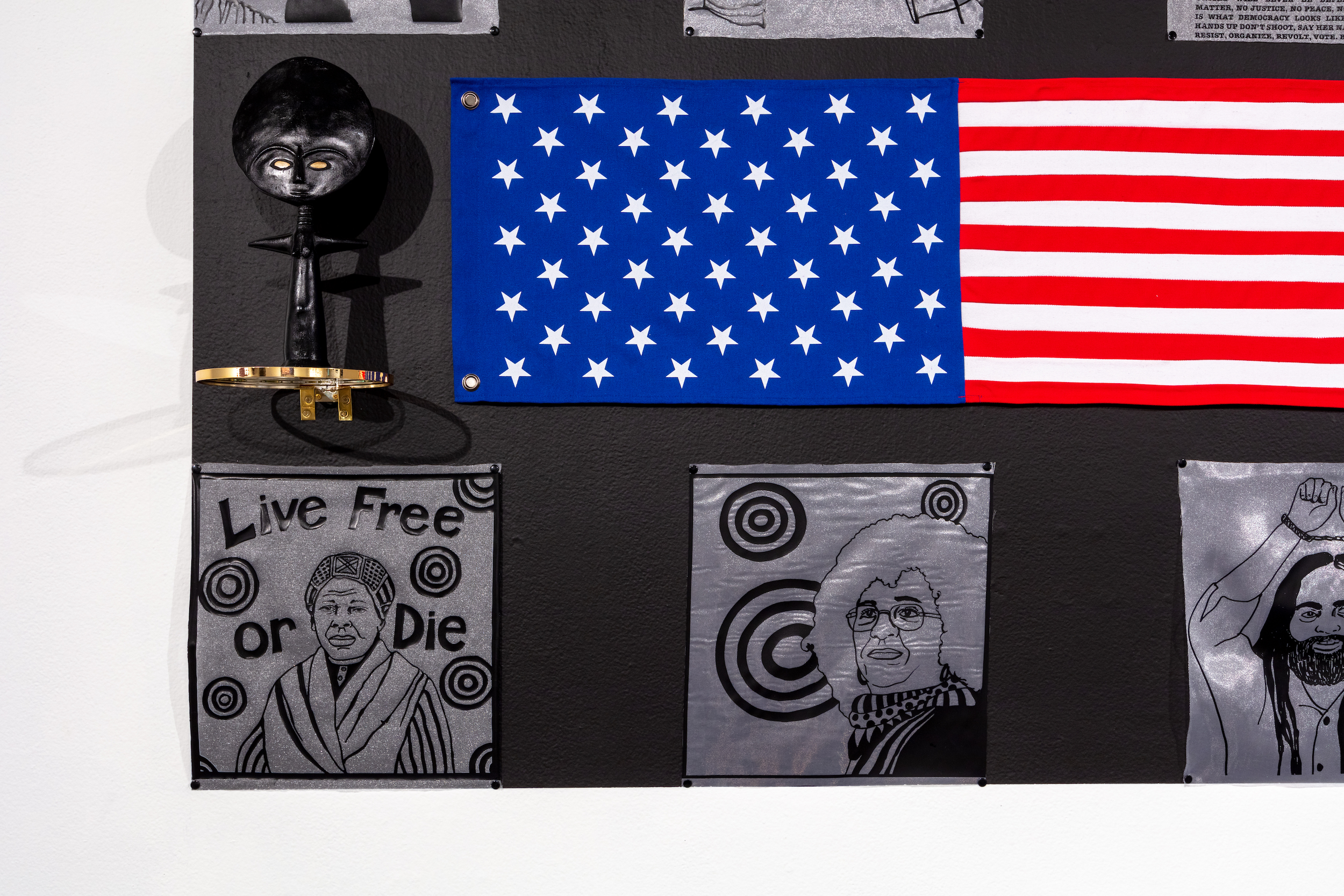 Meek was selected as one of ten national artists to celebrate the 10th Anniversary of the Nasher Sculpture Center with the commissioning of a site-specific installation. Meek’s retrospective “Vicki Meek: 3 Decades of Social Commentary” opened in November 2019 at Houston Museum of African American Culture and marked the end of her concentrating solely on her installation practice as she moves into creating work using video as the primary medium. She dubs these new works video comments since they are no more than 8 minutes in length and are done in a series format.

In addition to having a studio practice, Vicki Meek is an independent curator and writes cultural criticism for Dallas Weekly with her blog Art & Racenotes (http://artracenotes.blogspot.com) and also wrote a monthly column, ARTiculate for TheaterJones, an online performing arts magazine.