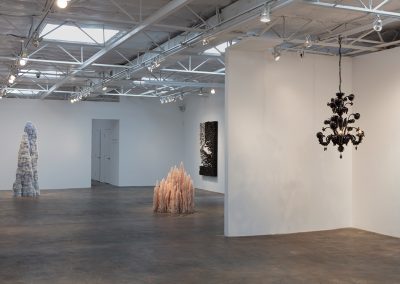 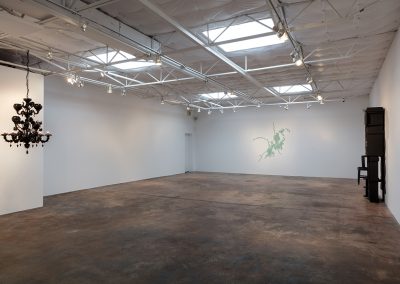 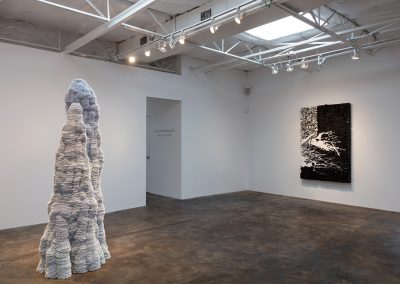 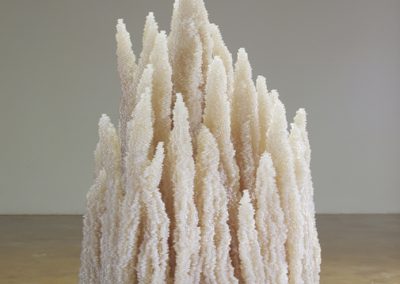 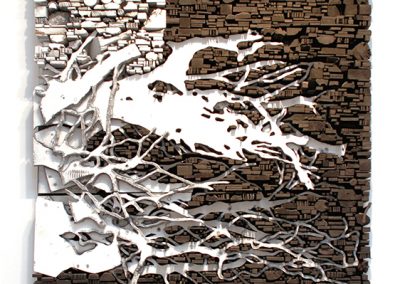 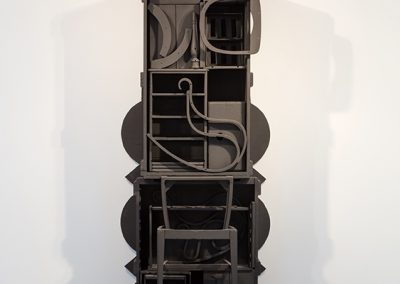 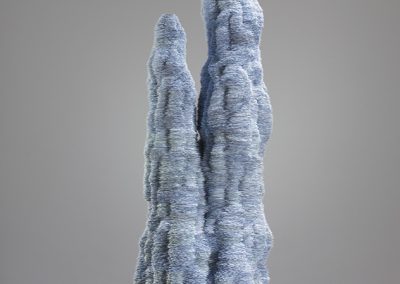 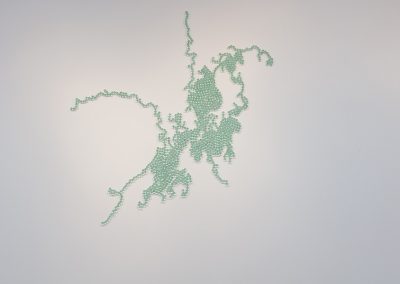 Curated by Talley Dunn, this exhibition brings together a group of artists of international renown that have distinguished themselves with their transformative three-dimensional works and the materials that they employ.  With media that range from the evocative glass marbles of Maya Lin’s site-specific installation Fox Lake to the daunting stacking of thousands of buttons in Buffs by Tara Donovan to the textural properties of wood both carved and found from the sculptures of Louise Nevelson and Leonardo Drew to the exquisite detail of Fred Wilson’s Venetian glass chandelier Oh! Monstrousa Culpa!, Material Presence explores the power of individual sculptural works that have a commanding presence and their abilities to captivate the viewer.

Exhibiting since 1996, Tara Donovan (b. 1969, New York) has produced a body of work that transforms ephemera and the banality of everyday objects into the extraordinary.  Donovan employs a minimalist vocabulary in which repetition and spatial relationships are integral.  Donovan’s practice straddles minimalism and maximalism; wherein ephemera becomes aesthetic and the infinite gesture inherent to traditional sculpture is replaced by the expression of fragmentation, fragility, and plurality.  Resembling coral reefs or stalagmites, Bluffs, denotes the physical and temporal nature of accumulation in Donovan’s work.  Comprised of countless buttons, the flat disk-like surface of each translucent unit is repetitively stacked and affixed with glue, unveiling tones and hues of ivory, soft fleshy pink, and mauve, in an otherwise transparent object.

In 1981, Maya Lin (b.1959, Athens, Ohio) captured international attention, when at age 21 years old and in her senior year at Yale University, she won the public commission to design the Vietnam War Memorial in Washington DC.   Recognized as an artist, designer, and environmentalist, Maya Lin has created a remarkable and highly acclaimed body of work in art and architecture.  In her most recent cartographic sculptures, the artist explores how we experience and relate to nature, setting up a systematic ordering of the land influenced by topographies and natural phenomena.  With Fox Lake, Lin captures the beauty of mapping a body of water through adhering countless glass marbles to the wall in a pattern based upon the shape of the lake, itself.  Through the reflective nature of the glass marbles and their organic arrangement on the wall, Lin constructs a mesmerizing geographic portrait of the natural world.

Fred Wilson (b.1954, New York) internationally lauded for his conceptual practice, received a MacArthur Foundation “genius grant” in 1999 and represented the United States with a solo exhibition in the US Pavilion for the Venice Biennale in 2003.  In preparation for the Venice Biennale, Wilson began collaborating with a Murano glass company to create black glass mirrors and a monumental glass chandelier in an 18th Century Venetian style.  Wilson’s use of black glass juxtaposed with the grandeur of a Venetian chandelier evokes the layers of history and race that have defined much of Wilson’s art throughout his career.  The exquisite black glass chandelier by Wilson presented in this exhibition entitled Oh! Monstruosa Culpa! finds inspiration in Shakespeare’s Venetian tragedy Othello.

Leonardo Drew (b.1961, New York) works from an aesthetic of urban debris, creating monumental sculptural works rich in abstract meaning.  Having exhibited previously at Talley Dunn Gallery and with an upcoming exhibition planned for November 2017 at the gallery, Drew returns with signature wall relief.  Constructed with layer upon layer of wood – found, carved, cut, and manipulated — an abstract landscape emerges through the textures and patterns suggestive of time, history, and connection.

Louise Nevelson (b. 1988 Kiev, Russia; d. 1988, New York) was a leading sculptor of the 20th Century and she pioneered site-specific and installation art.  Known for her monochromatic works comprised of elements of found materials collected from areas surrounding her studio, Nevelson would transform disparate elements made of wood into a unified structure.  The artist is most commonly recognized for her series of monochromatic wood sculptures painted in black which she began in the 1950s.  Untitled 1976-1978 in this exhibition was constructed from found wooden box units gathered by the artist on the Lower East Side of Manhattan.  Stacked vertically as if being seen through a doorway, remnants of the past reveal themselves — old wooden crates, rocking chair parts, furniture debris, and lost memories.  This sculpture was one of the last works in Nevelson’s Spring Street residence when she died in 1988.