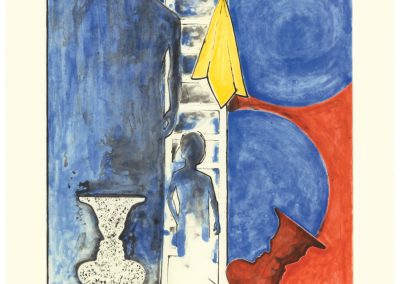 Dallas – In partnership with legendary fine art prints publisher United Limited Art Editions, Talley Dunn Gallery is honored to present Jasper Johns: Circles and Squares, an exhibition that features lithograph and intaglio prints completed by the artist at ULAE in the past twenty years.  The show will be on view March 2nd through June 1st in the Project Gallery and will open with an evening reception on Saturday, March 2nd from 6:00 to 8:00 p.m.  Master printmaker Bill Goldston will give a talk about his thirty years’ collaboration with Jasper Johns on Saturday, March 2nd at 2pm.

A celebrated American painter for more than fifty years, Jasper Johns is recognized for his now iconic paintings that feature flags, targets, and numbers, as his artwork has been celebrated with important one-person exhibitions at the Whitney Museum of American Art, the National Gallery of Art, and a retrospective at the Museum of Modern Art in 1996.

At first influenced by the dominating style of Abstract Expressionism upon his move to New York City in the late 1940s, Johns’ interaction with artist Robert Rauschenberg, composer John Cage and dancer/choreographer Merce Cunningham led to a complete change in his approach to painting.  After a series of groundbreaking exhibitions at Leo Castelli Gallery in the late 1950s and 1960s, Johns’ painting served as a crucial bridge between Abstract Expressionism and the later movements of Pop Art and Minimalism.

In addition to painting, printmaking has also played an important role throughout Jasper Johns’ career.  When the artist created his first project at Universal Limited Art Editions (ULAE) in 1960, he used lithography as the primary technique to render his imagery of number and targets.  Early lithographs included the 0 through 9 portfolio, Coat Hanger I, Flag I and Target.   Later, Johns turned to the handfed offset lithographic press and intaglio to capture various subjects, such as the seasons, everyday objects, and faces.

Ten prints will be featured in the exhibition, including the recent intaglios Fragment of a Letter, Shrinky Dink 1-4, Within, and Bushbaby.  Fragment of a Letter continues Johns’ exploration of systems of meaning with a two-panel presentation of text rendered in the artist’s all capitalized, stenciled lettering paired with a translation of the letters and words presented by hands communicating in American Sign Language.  Another highlight of the exhibition includes Untitled, 1998, an intaglio printed with four colors that recalls the multi-panel paintings from the 1960s, complete with the colors spelled out across the surface with a compliment of handprints, areas of gestural strokes, and various enigmatic objects.