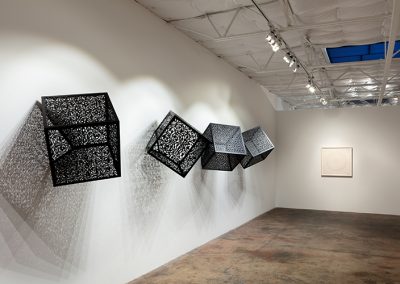 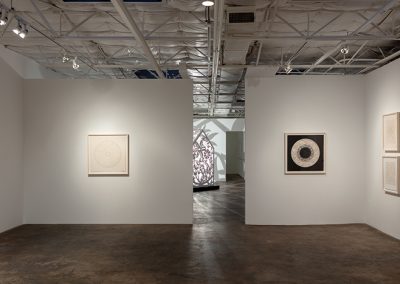 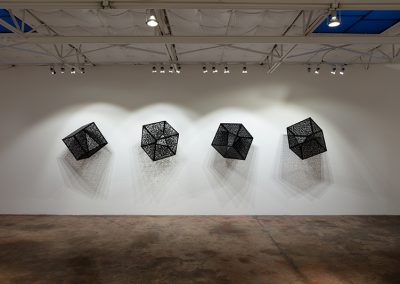 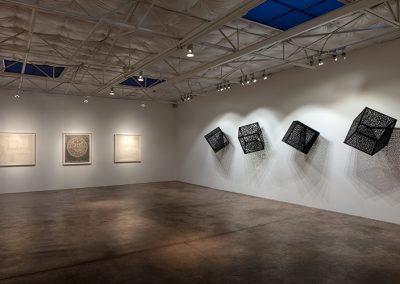 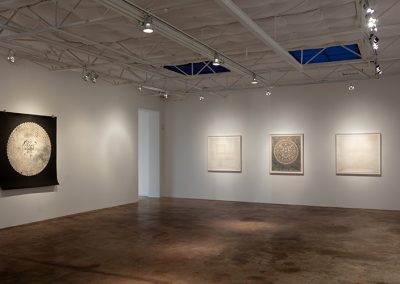 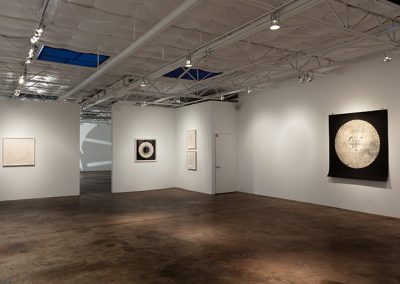 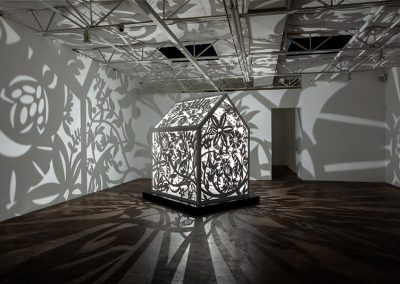 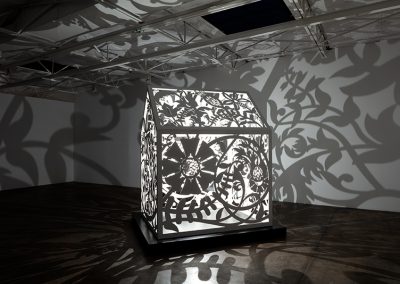 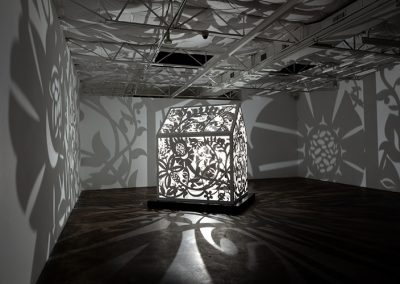 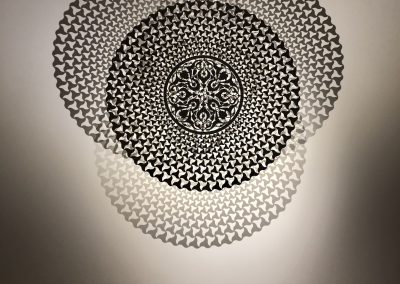 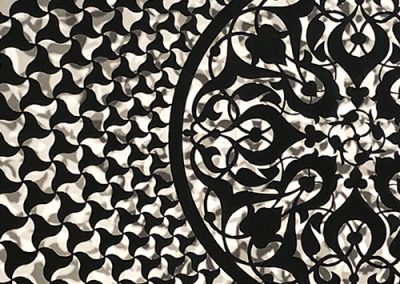 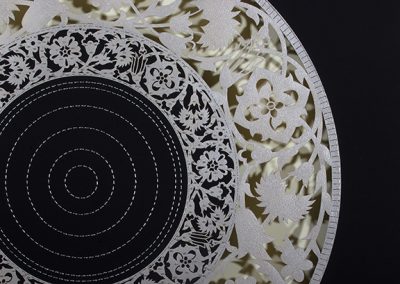 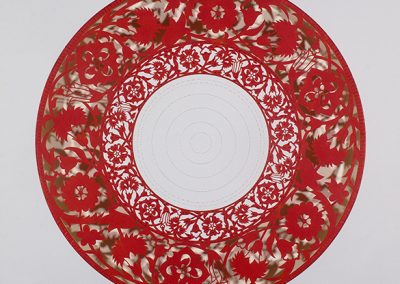 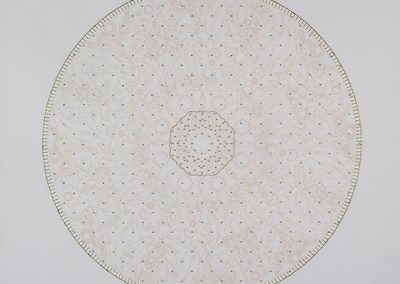 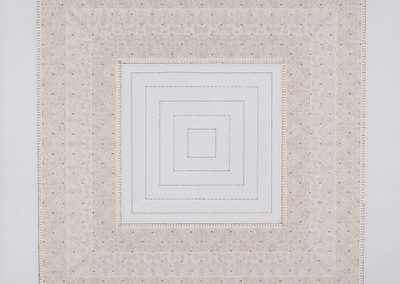 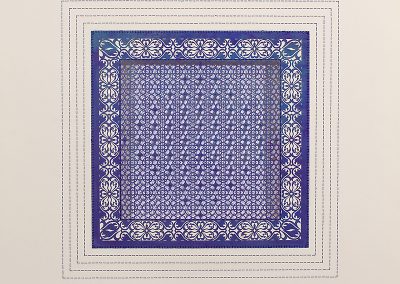 Anila Quayyum Agha is a Pakistani-American artist who currently lives and works in Indianapolis. Agha’s work explores the intersection of perceived cultural and social polarities such as the masculine-feminine, public-private, and religious-secular. She uses a variety of media, from large-scale sculptural installations to intimate embroidered drawings to question her place within these binaries and, in so doing, raises questions about the validity of our broad cultural acceptance of them. She is known for her innovative use of laser technology to cut lace-like designs into her installations, which create intricate and bold shadows when lit from within.

Itinerant Shadows features multiple laser-cut steel sculptural installations as well as a series of embroidered, cut, and layered works on paper. This body of work continues her exploration of cultural contrasts and commonalities, which began with the internationally-exhibited sculpture Intersections. Her recontextualization of Islamic geometric motifs creates a quiet space of contemplation, while also referencing the frequent large-scale use of such patterns in public spaces. Agha considers the itinerant movement of viewers integral to this tension between public and private. In the artist’s words, “the audience’s presence becomes essential to experiencing a shared space while simultaneously affording intimacy, suggestive of the fluidity of human interactions.” Additionally, Agha’s use of materials interrogates common cultural associations with geometric pattern as pure, authoritative, and mathematical. The works on paper incorporate delicacy in the use of embroidery, beading, and multiple layers to reference craft techniques that have historically been associated with women and the home. In adopting these techniques, Agha creates space to question normative gender roles and their histories.

In addition to exploring the intersections between the public and the private, the masculine and the feminine, and the natural and the man-made, the body of work presented in Itinerant Shadows also deconstructs the notion of authenticity. Light and shadow create ever-changing iterations of the same pattern while the reconsideration of Islamic motifs makes originality elusive, hindering what Agha describes as “the postcolonial quest for originality and purity.” She explains that in her work this search for authenticity becomes an “ultimately circular geometric pursuit where primary form can only be imagined and never fully captured.”

Meanwhile, the transparent, ethereal quality of Agha’s works create an exploration of sorrow and loss. The intimate nature of the works on paper draws out the viewer’s experiences of isolation or connection while the sculptures with their cast shadows “inhabit a limbo of loss, a space between visibility and invisibility, reality and unreality, light and shadow, real and unreal.” Similarly, Agha’s muted palette, transparent layers and subtle textures evoke the ephemerality of life, while the cut-out shapes directly reference marble gravestones and shrouds used to commemorate death in Pakistan.

Agha received her BFA from the National College of Arts, Lahore (Pakistan) and her MFA from the University of North Texas. She has previously been the subject of solo exhibitions at the MOCA, Jacksonville in Florida, Peabody Essex Museum (Salem, MA), the National Sculpture Museum (Valladolid, Spain), Rice Gallery (Rice University, Houston), the Dallas Contemporary, the State Museum (Indianapolis), the Cincinnati Art Museum, and the Grand Rapids Art Museum (Grand Rapids, MI). She is an associate professor of drawing at the Herron School of Art & Design/ IUPUI in Indianapolis. Agha has received numerous fellowships and grants for her creative research, including the Efroymson Arts Fellowship, the Creative Renewal Fellowship through the Indianapolis Arts Council, and multiple grants from Indiana University. Her distinctions include winning both the Juried & Public-Vote Grand Prizes at ArtPrize in 2014 with her sculptural installation titled Intersections, which has been the darling of social media to-date. Agha also received Cincinnati Art Museum’s Schiele Prize in 2017, and the DeHaan Artist of Distinction Award in 2018. Her work has been collected by both institutions and private collectors nationally and internationally.

We are happy to provide more information regarding any available works. In addition to the selection of artwork featured here, we have a comprehensive inventory of available works that are not on our website. Please let us know if you’d like to receive a complete checklist of available works by emailing frontdesk@talleydunn.com.