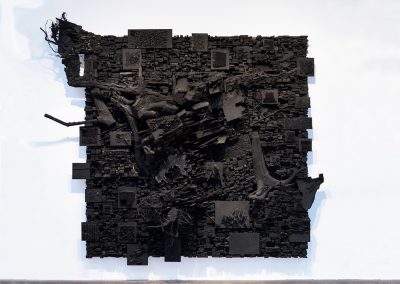 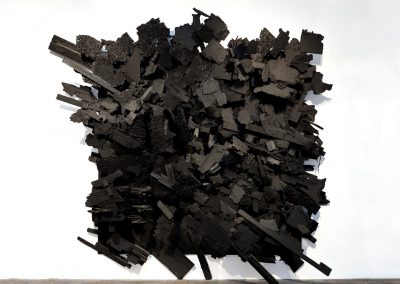 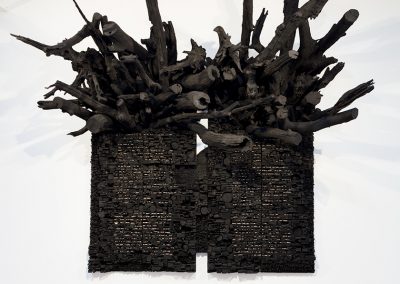 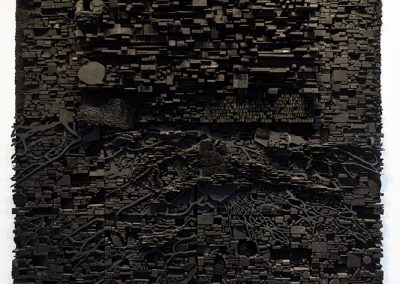 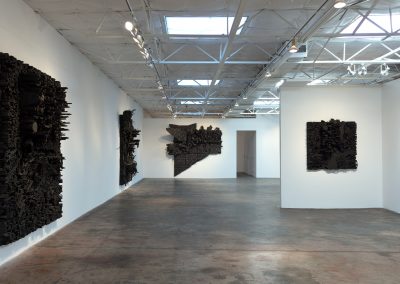 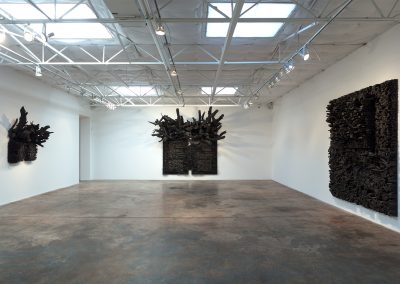 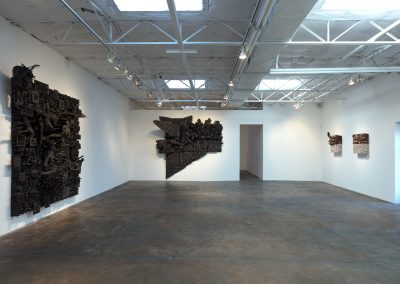 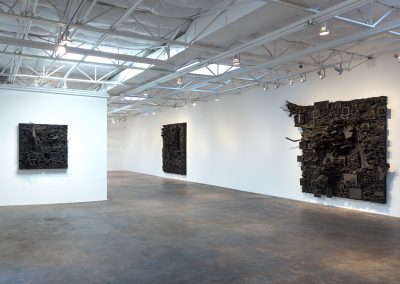 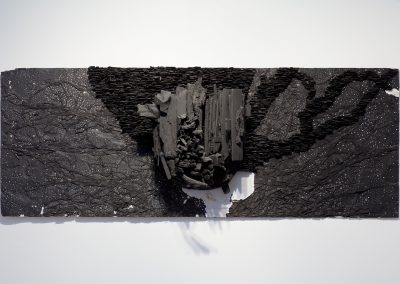 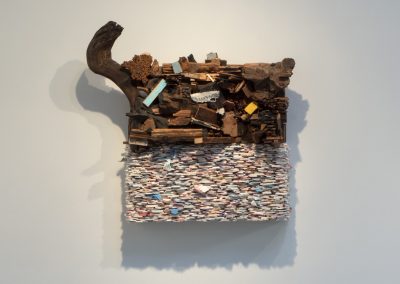 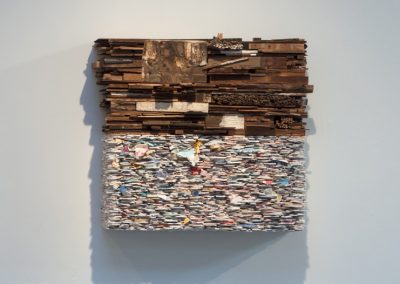 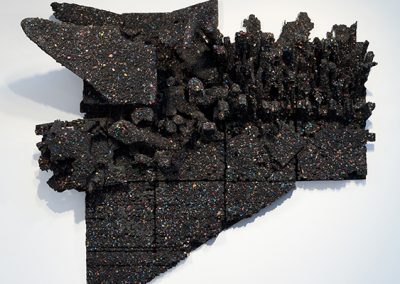 For this exhibition, Drew has created his signature landscape of monumental twisted forms and blocks of wood projecting dramatically from the gallery walls.   Built in his Brooklyn studio, these twelve wall-mounted sculptures evoke the sense of an abstracted landscape for which Drew has been internationally recognized.  Ranging from heroic, monumental constructions with massive tree segments projecting from the wall’s surface to intricate grids consisting of thousands of pieces of cut wood.  Drew reminds the viewer of time’s passing and the natural processes of decay and regeneration.

By manipulating the wood and other objects to weather and age them, Drew’s awe-inspiring sculptures reveal the artist’s intense attention to shaping, cutting, building, and working his pieces through his own material language.  These densely stacked and layered sculptures activate the spaces in which they occupy with a dynamic presence whereby complexity and simplicity coexist.  From tree roots and branches to piles of meticulously placed blocks of wood, Drew impresses the viewer with the sheer weight and presence of his unique vision. This pairing of natural and man-made lines produces a sense of tension and incredible energy within the sculptures, suggesting forces just contained or on the edge of breaking through.  The physical spaces depicted within the work at times read as abstracted landscapes or rugged skylines, depending on the viewer’s perspective.

Born in Tallahassee, Florida, Drew grew up in Bridgeport, Connecticut, where he showed an early ability for drawing and had his first solo exhibition at the age of fourteen.  After graduation from high school, Drew attended the Parsons School of Design in New York and later transferred to The Cooper Union for the Advancement of Science and Art, where he graduated with a Bachelor of Fine Arts degree in 1985.

Simultaneous with this exhibition, Drew’s work is currently on view at the de Young Museum in San Francisco.  Spanning the museum’s cavernous atrium, Drew created an expansive installation entitled Number 197 for the museum which will be on view until October 29, 2017.  The artist’s sculpture has been shown in numerous solo exhibitions, including the Museum of Contemporary Art, San Diego; the St. Louis Art Museum; the Hirshhorn Museum and Sculpture Garden, Smithsonian Institution, Washington, DC; The Fabric Workshop, Philadelphia; Palazzo delle Papesse, and Centro Arte Contemporanea, Siena. In 2009, the Blaffer Gallery at The Art Museum of the University of Houston exhibited a mid-career survey exhibition entitled Existed: Leonardo Drew, which travelled to the Weatherspoon Art Museum in Greensboro, North Carolina, and to the DeCordova Museum and Sculpture Park in Lincoln, Massachusetts.

In addition, Drew has participated in artist residency programs at ArtPace, San Antonio and The Studio Museum of Harlem in New York, among others.  Drew’s artwork is included in major museum collections, including the Tate Modern; the Museum of Modern Art, New York; the Metropolitan Museum of Art, the Solomon R. Guggenheim Museum; the Museum of Contemporary Art, Los Angeles; the St Louis Art Museum, and the McNay Museum of Art, San Antonio.  Last October, the artist was featured in the seventh season of PBS’ series, ART 21: Art in the 21st Century.