Talley Dunn Gallery is distinctly honored to announce an exhibition of David Bates’ most recent works, Grassy Lake. This momentous exhibition of painting marks both the artist’s return and final goodbye to a subject of remarkable importance to both the artist and the development of his practice. 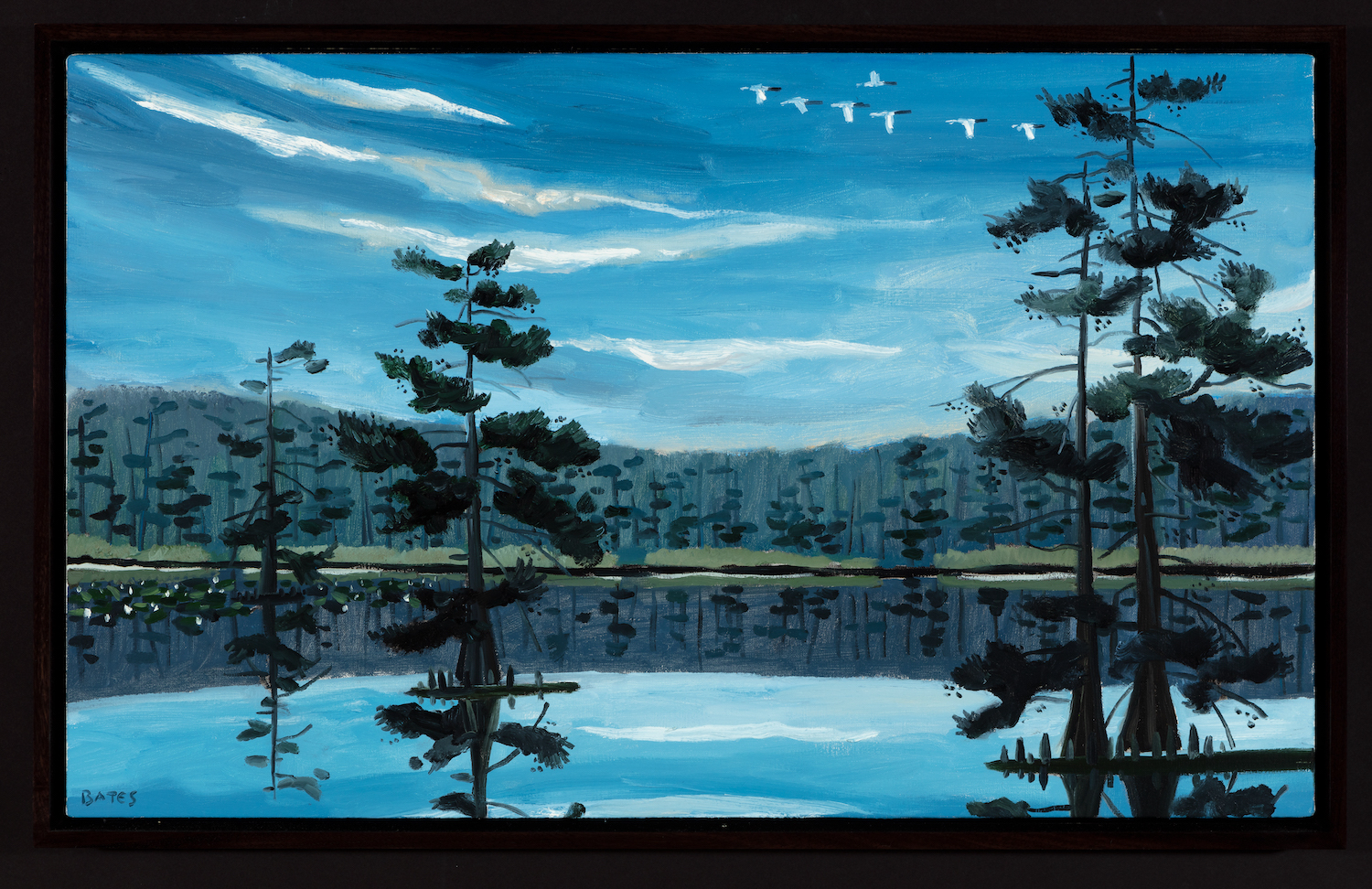 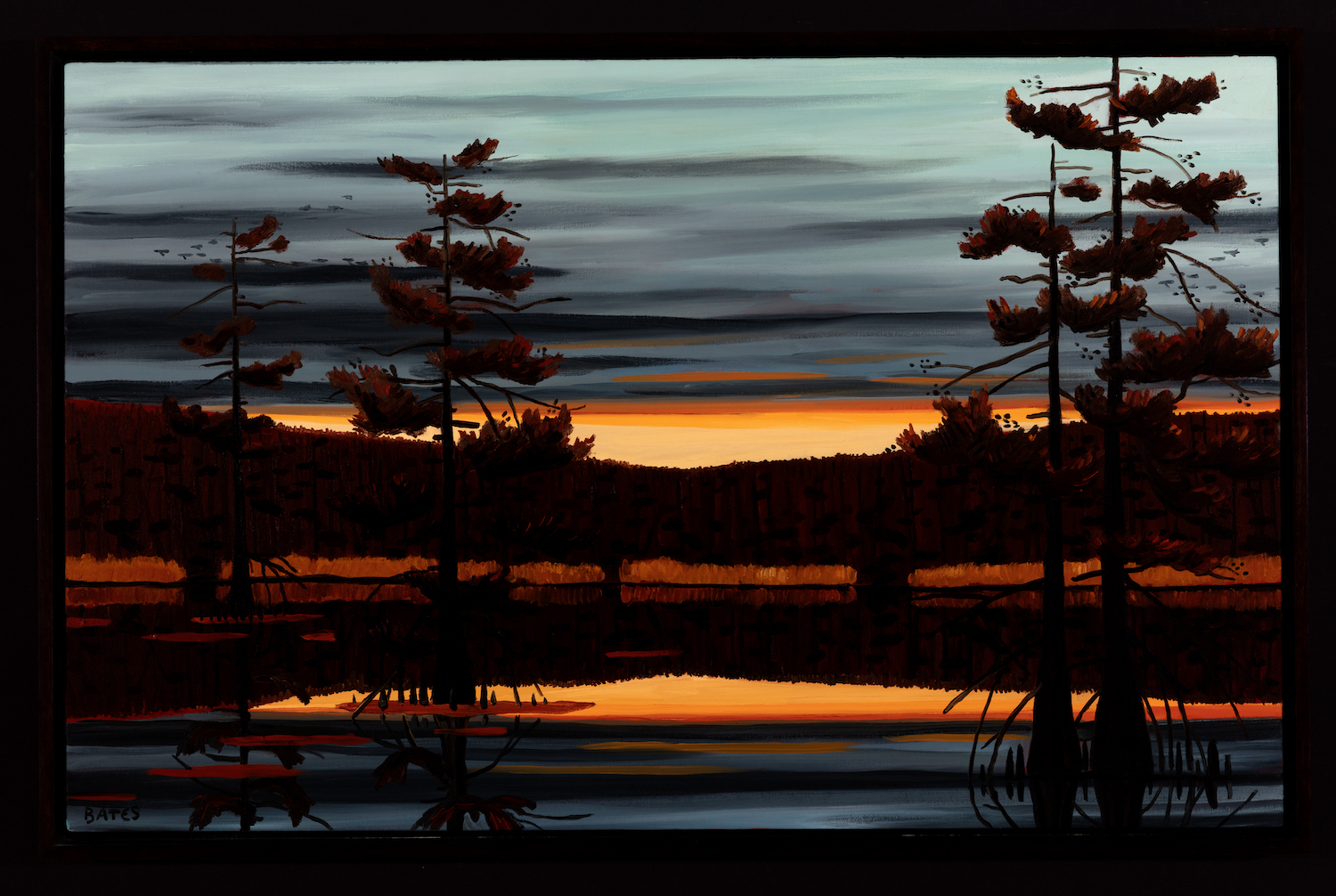 Bates first visited the low-lying wetland dense with 350-year-old cypress trees and tupelo in central Arkansas that is Grassy Lake in 1982. Up until the close of the decade, the artist continued to return to this captivatingly spectacular place for renewed inspiration. It revealed to Bates an otherworldly environment teeming with wildlife and dramatic beauty throughout its swampy terrain. This is where Bates met his mentor and the subject of many of his paintings from the 1980s, Ed Walker. Although his frequent visits ceased after the passing of his close friend in the early 1990s, Bates recently revisited this formative place with the idea that he would paint a series around it and retire upon its completion. This exhibition may therefore be the final chapter of Bates’ painting practice—a profound and euphoric return to Grassy Lake. 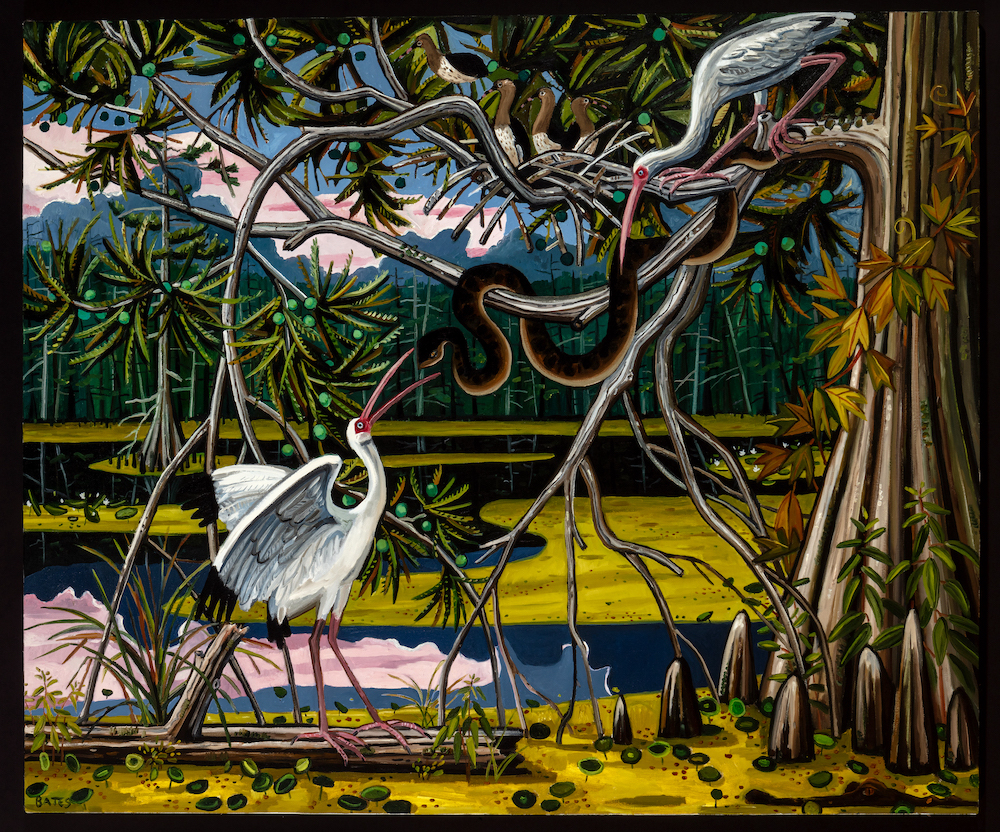 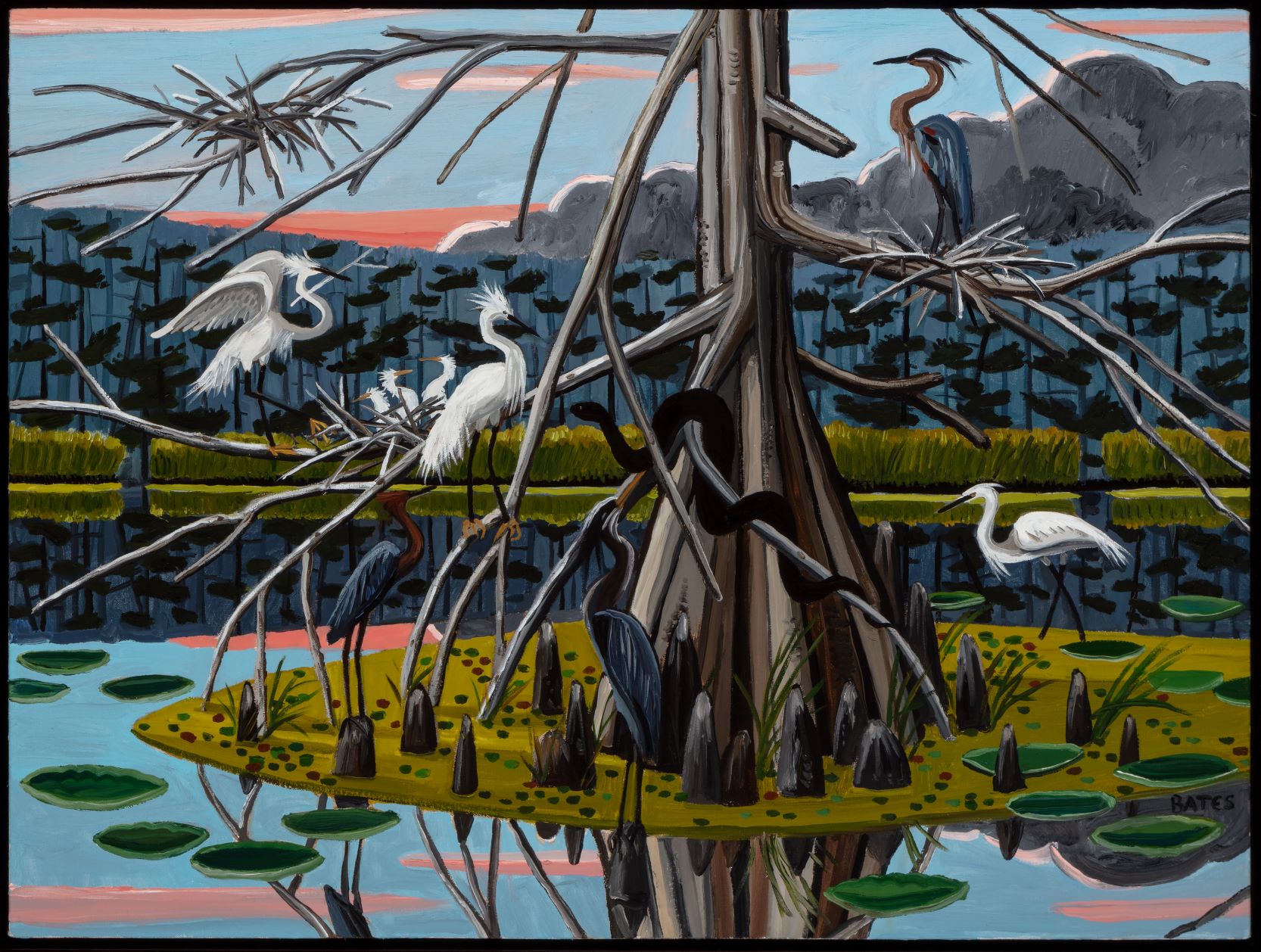 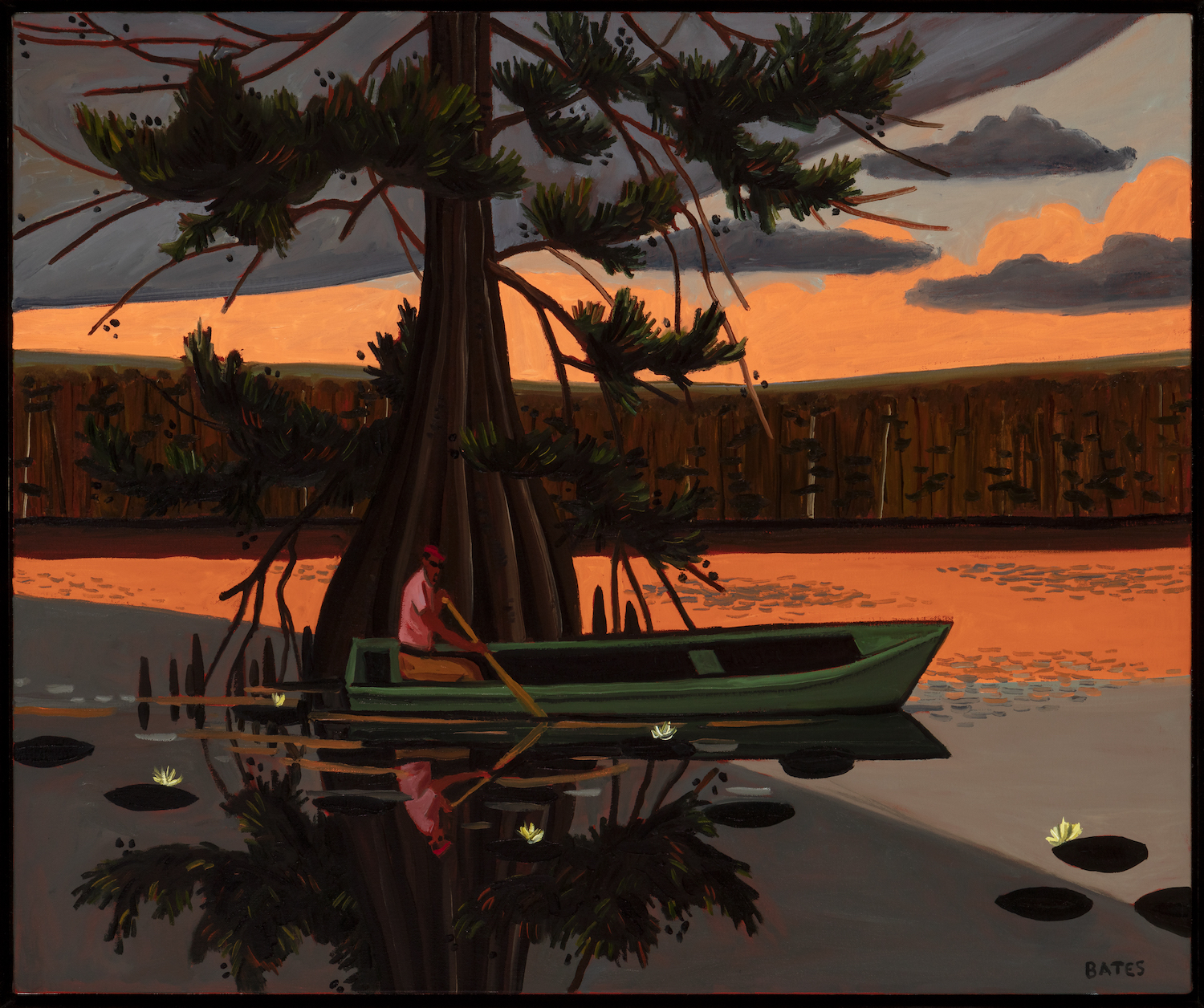 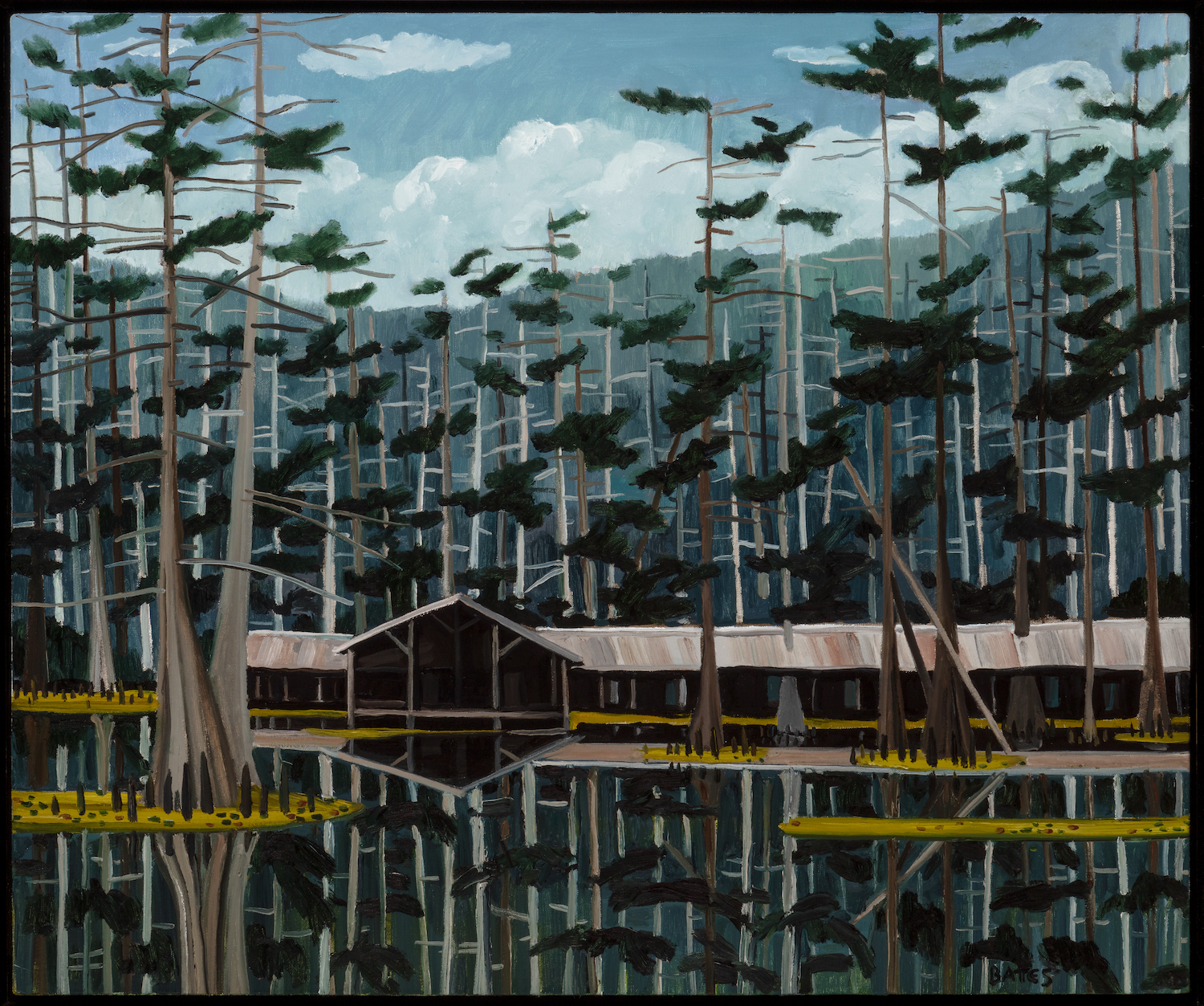 With a deep reverence for the grandness and force of Grassy Lake, Bates strives to share its breathtaking beauty with the viewer, drawing upon his comprehensive knowledge of the flora and fauna of the enchanting environment. Often painting from memory, Bates has spent the past few years creating a visual survey of the watery terrain filled with extraordinary wildlife as seen in the epic painting Ibis and Snake (2018). It is nature, itself, which the artist strives to capture. Perhaps with an eye towards the American Masters of the late 19th century and American Regionalism of the early 20th century, as well as artists such as Winslow Homer and Marsden Hartley, Bates embraces the notion that an artist’s connection to place is essential to making important works of art. 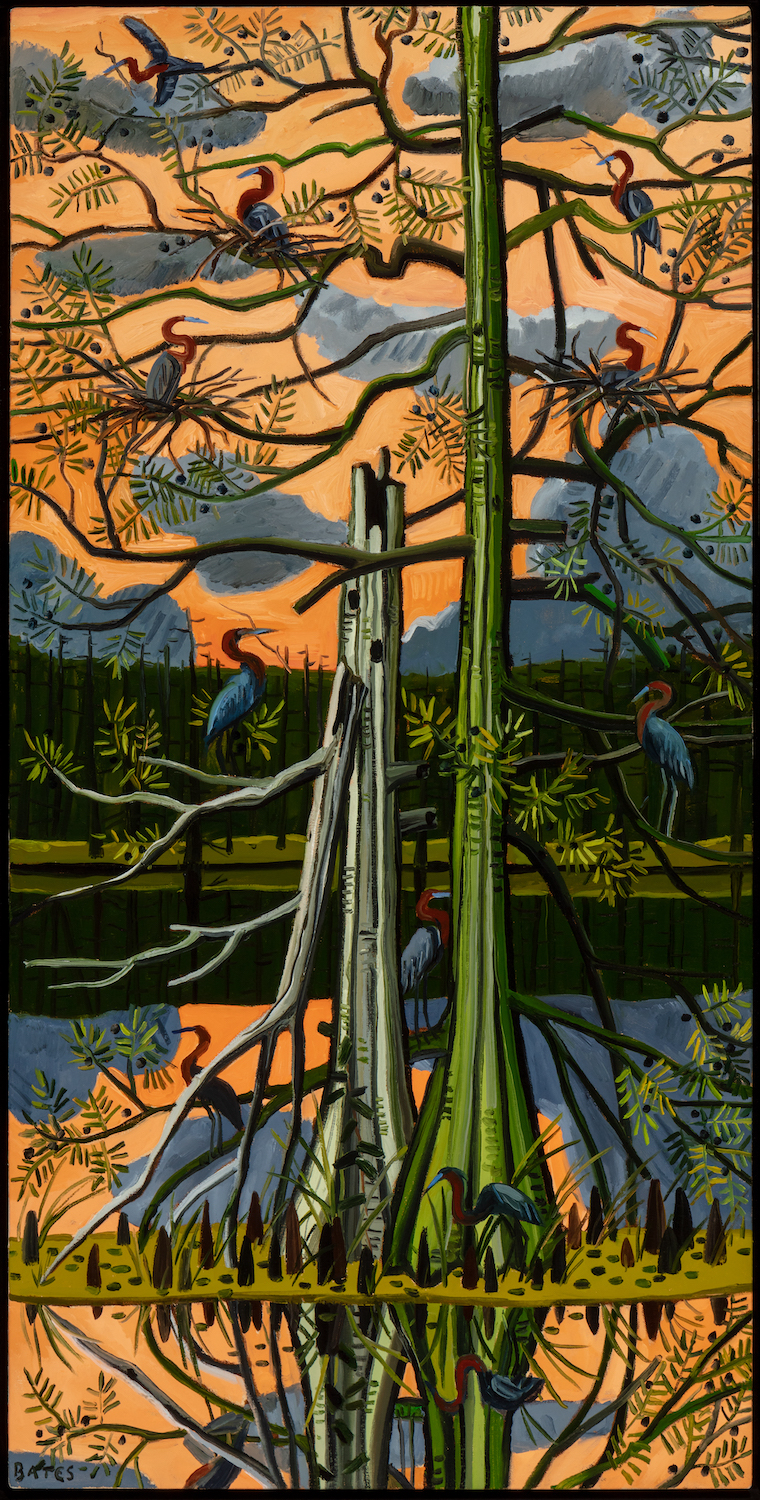 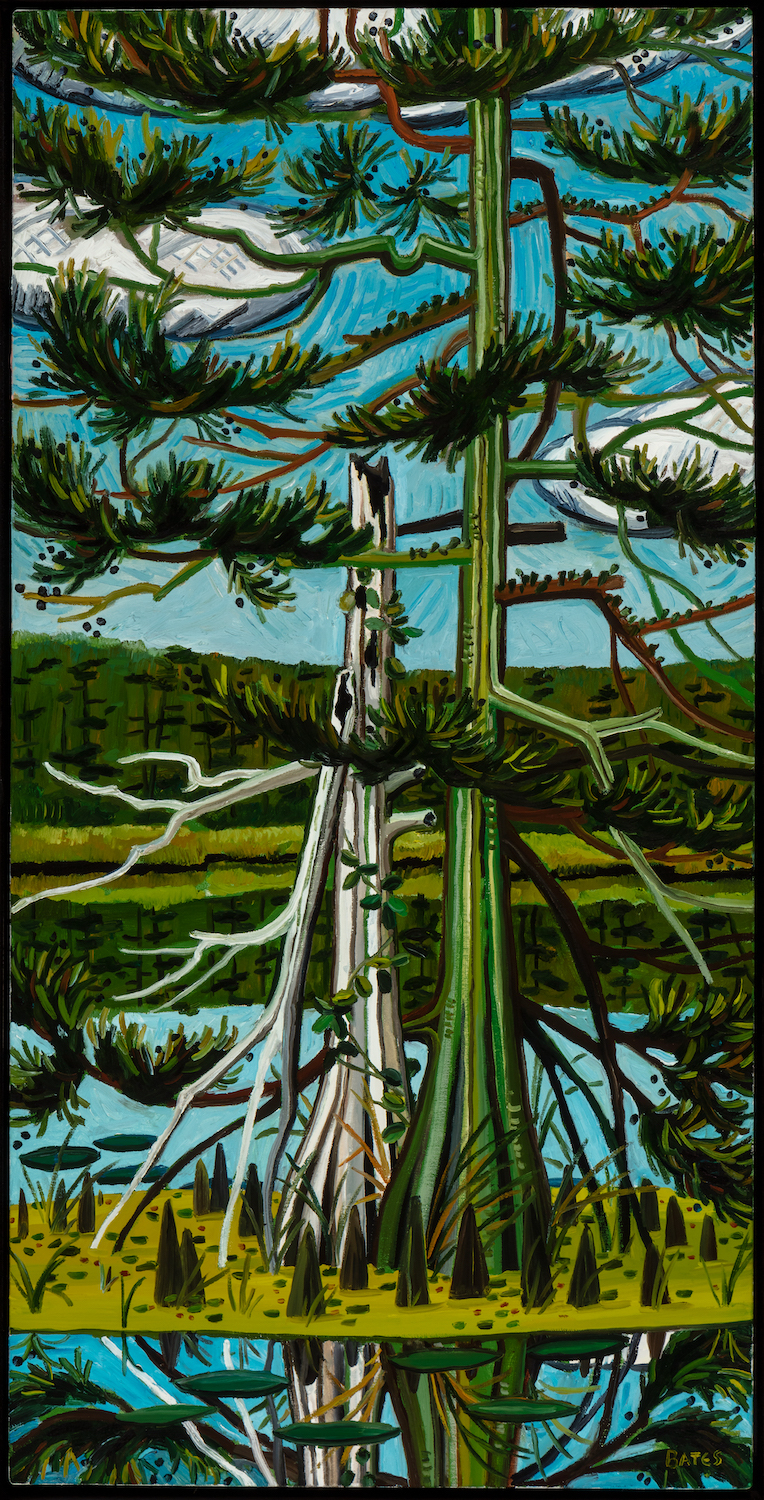 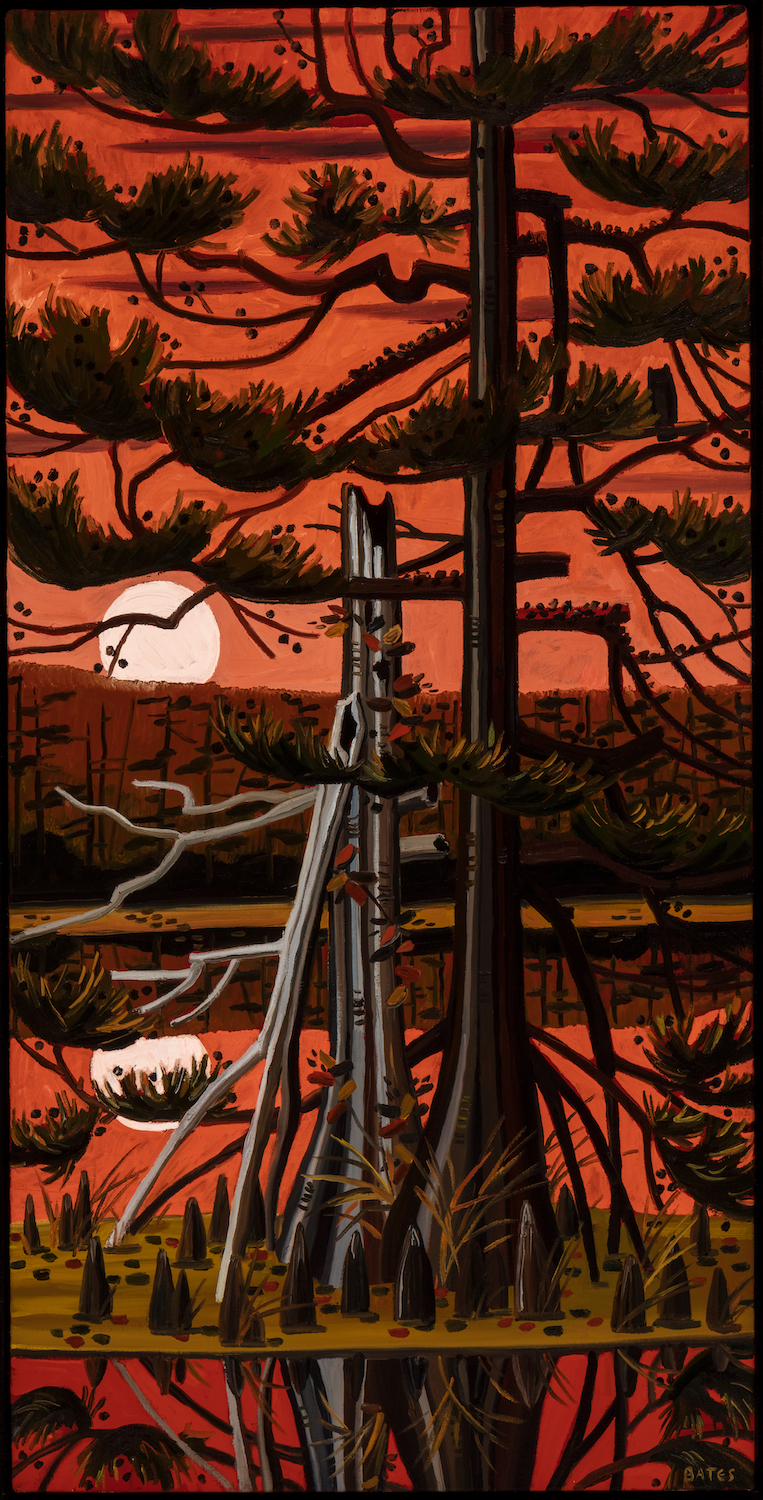 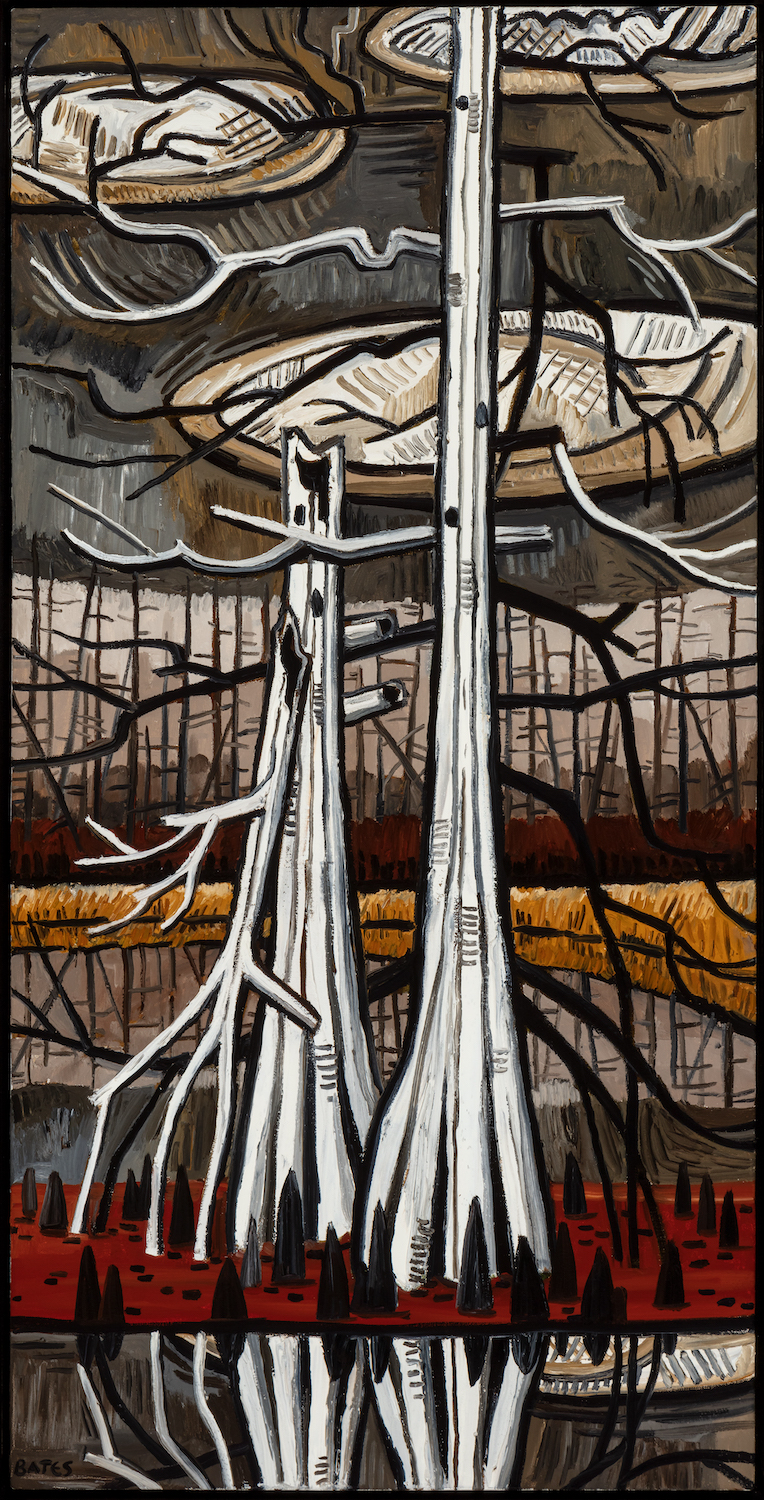 A noticeable shift in the paintings of Grassy Lake from the 1980s to the present is the relationship of the figure to the landscape. In the early paintings of the 1980s and early 1990s, the figures are often placed centrally within the composition. In the later paintings of this exhibition, Bates is clearly focused on the grandeur of the landscape, as it dominates the composition, emphasizing the role of nature in relation to the human figure. With the natural environment at the center of the artist’s concentration, Bates pays homage to Grassy Lake from season to season and from dawn to dusk. The artist reveals seasonal shifts in light, temperature, and the habitat itself, as well as the varied ways in which the wildlife inhabit the wetlands throughout the year. 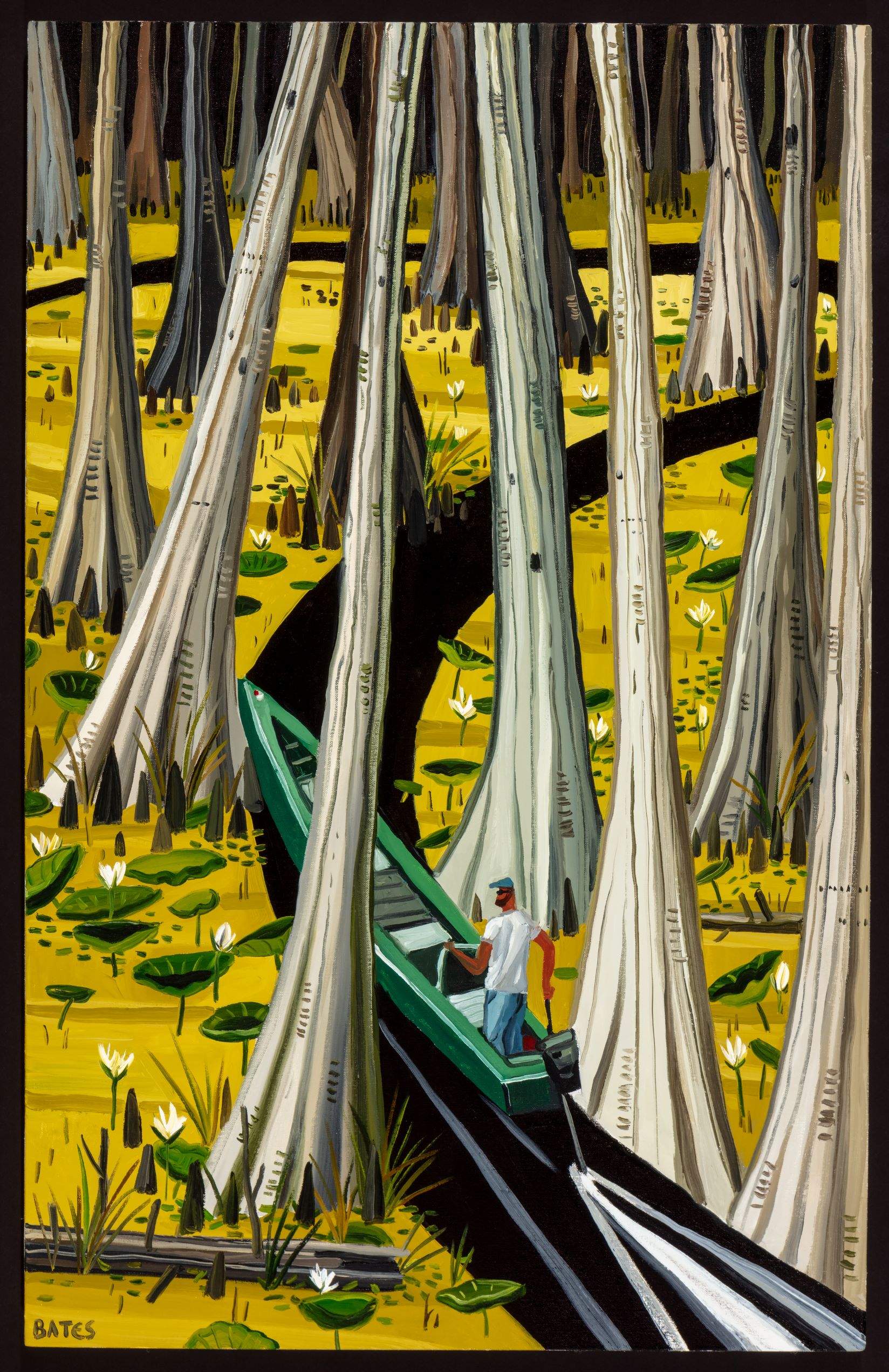 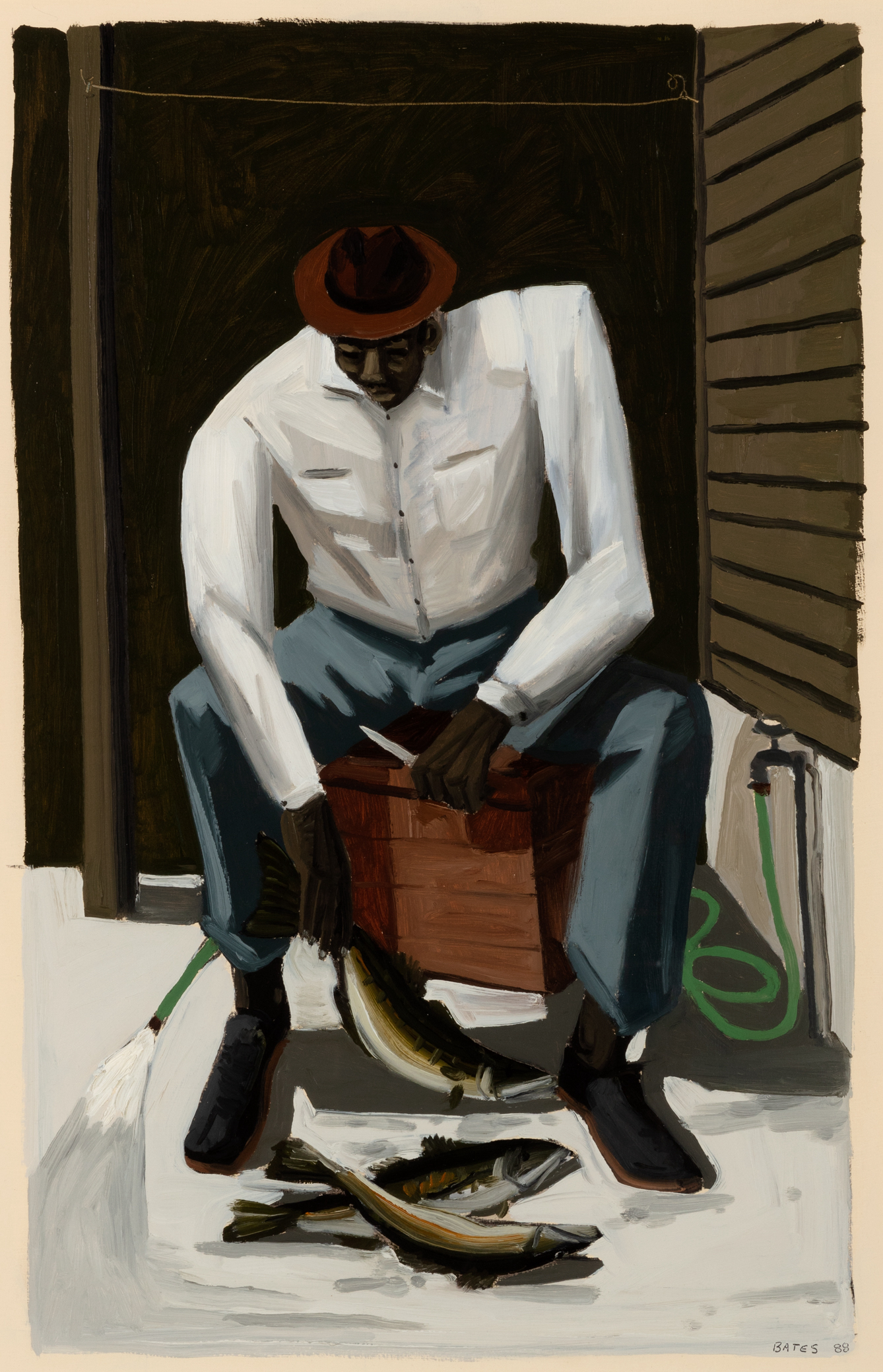 After painting Grassy Lake for nearly four decades, Bates has rendered his experience of a snowfall in this revered landscape for the first time. Bates attends to the winter season with snow that blankets the boat dock and waters. Never before has the artist painted snow in any of his outdoor landscape paintings. These final wintery snowscapes of Lower End Boat Dock – Snow (2020) and Lower End Boat Dock – Winter (2020) were created in Bates’ Dallas studio during the isolation of the pandemic. Their tranquil and reflective mood, devoid of figures and wildlife, seems a fitting tribute as an end to the painter’s practice and artistic engagement with Grassy Lake. 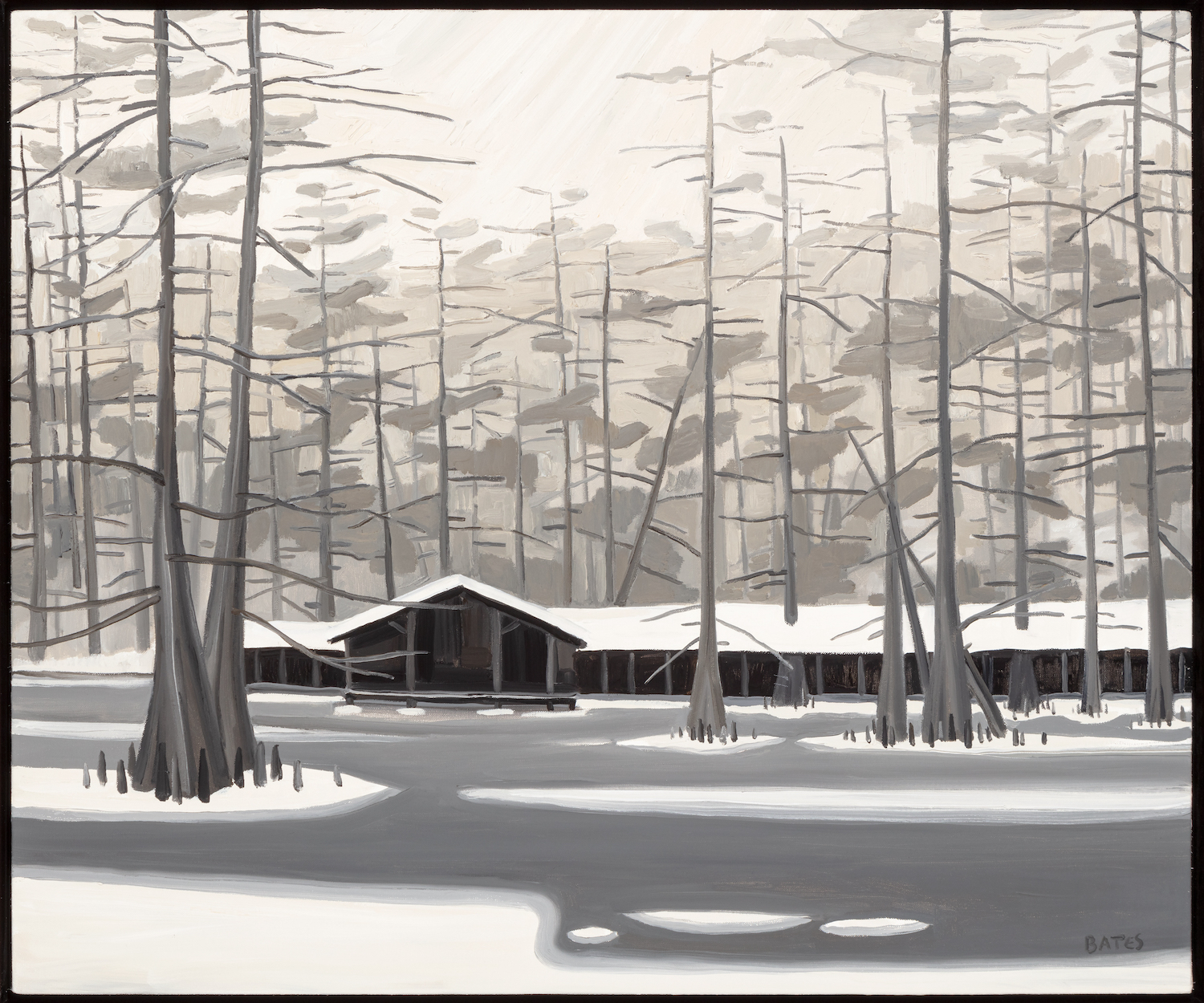 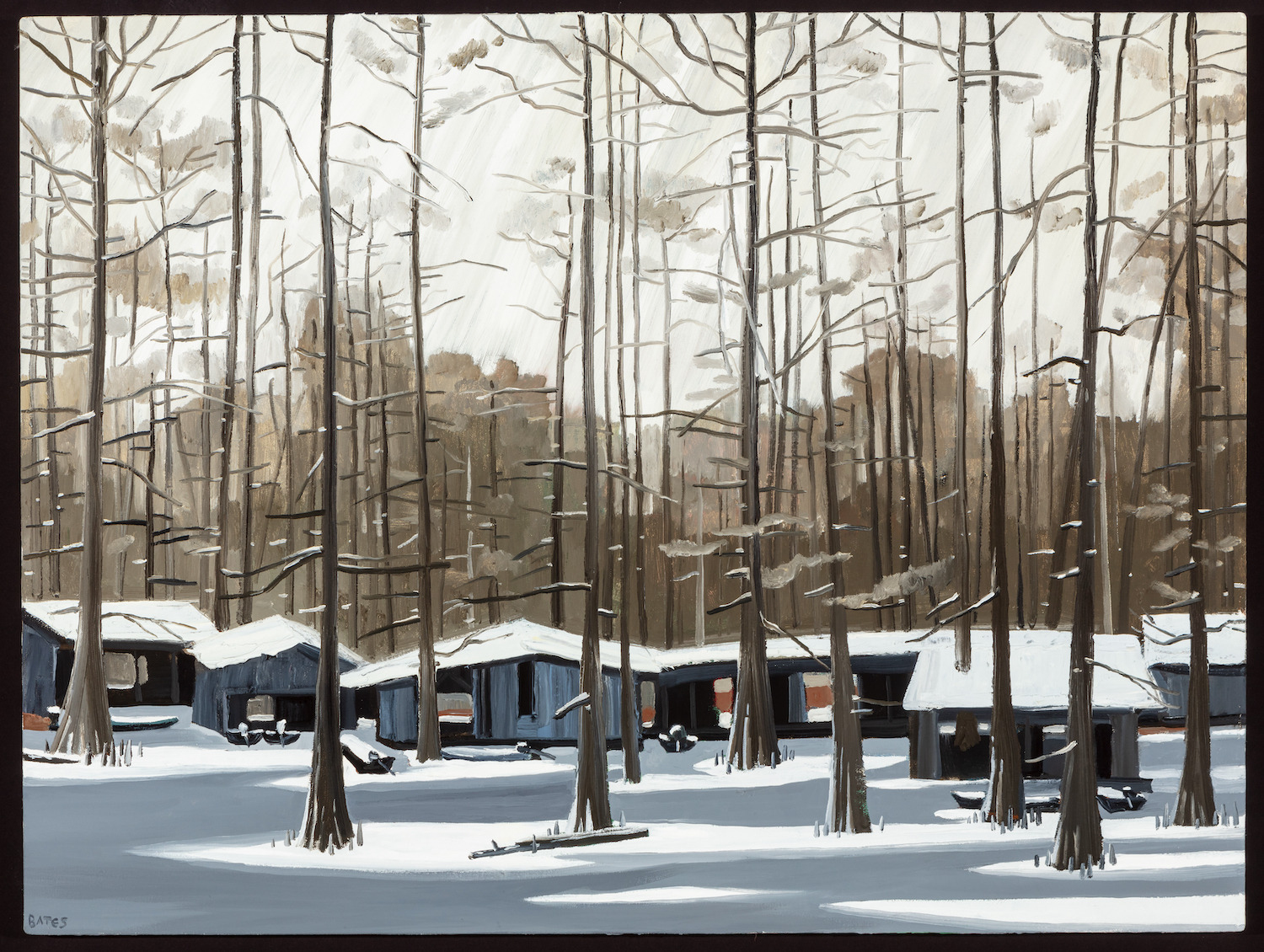 David Bates is a Dallas native and widely recognized as one of the most acclaimed Texas artists. After receiving a BFA from Southern Methodist University in 1975, he participated in the Whitney Independent Study Program before returning to SMU to earn his MFA in 1978. Upon finishing graduate school, Bates participated in group exhibitions that traveled to museums around the country, including the Corcoran Gallery of Art; the Metropolitan Museum of Art; and the Contemporary Arts Museum, Houston. In 1987, Bates was selected for the prestigious Whitney Biennial, and in 1988, the Modern Art Museum of Fort Worth organized a traveling exhibition of his work. Since then, several important exhibitions have featured Bates’ art, including a joint retrospective organized by the Nasher Sculpture Center and the Modern Art Museum of Fort Worth in 2014.

Best known for his paintings on canvas or panel, Bates is also prolific in sculpture and works on paper. His work explores the formal limitations of medium and is recognizable for its bold forms and dark outlines. Through both subject matter and style, Bates’ paintings clearly reference American Regionalism, and his still lifes frequently connect to modernists such as Henri Matisse. More than forty museums across the country house work by Bates in their permanent collections, including the Dallas Museum of Art; Metropolitan Museum of Art; Museum of Fine Arts, Boston; Carnegie Museum of Art, Pittsburgh; Whitney Museum of American Art; the Hirshhorn Museum and Sculpture Garden; Sheldon Memorial Art Gallery and Sculpture Garden, Lincoln, Nebraska, Museum of Fine Arts, Houston; Modern Art Museum of Fort Worth; the National Museum of American Art, Washington, D.C.; the El Paso Museum of Art; and the San Francisco Museum of Modern Art. Bates continues to live and work in Dallas, Texas.