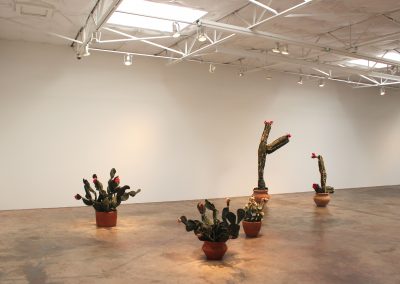 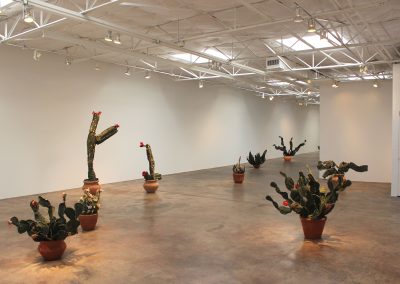 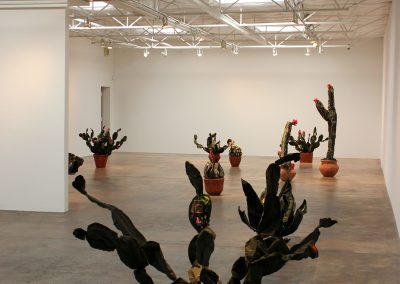 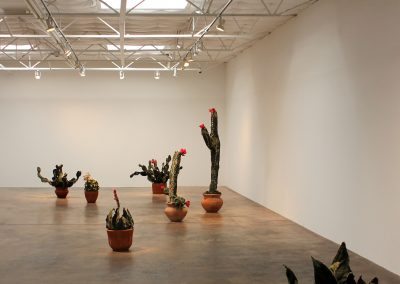 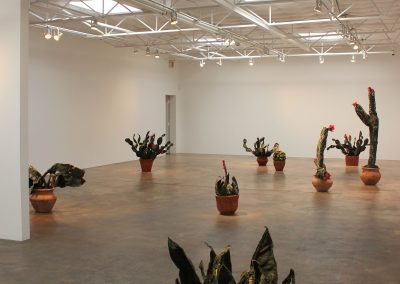 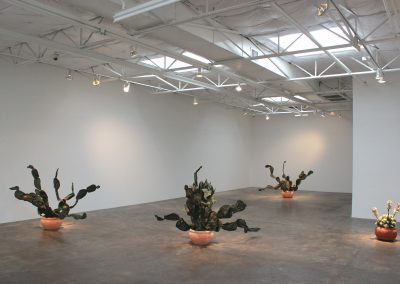 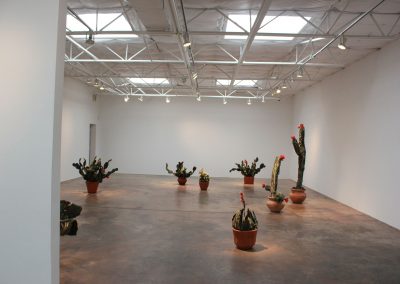 Talley Dunn Gallery is pleased to announce its first exhibition with El Paso-based artist Margarita Cabrera.  Her exhibition, Sewing Our Landscape, will open with a reception and artist’s talk on Friday, October 24th from 6:00 to 8:00 PM and will be on view through Saturday, December 13th.  The artist’s remarks will open the reception at 6:00 PM.

As a sculptor and performance artist who works both in the studio and out in the community, Cabrera seeks to create work that explores issues such as immigration, fair labor, craft traditions, and economic empowerment.  Known for her sewn soft sculptures of everyday household items, Cabrera uses the imagery as a way to remind viewers about the people who fabricate these products and the low wages that they are often paid.  In her first exhibition with the gallery, Cabrera will present fourteen soft sculptures representing cactus plants native in the southwestern United States and northern Mexico.

The artist has sewn the sculptures with fabric from border patrol uniforms, and many of the works feature embroidery crafted by immigrant workers that relay their own individual stories of crossing the border.  Both the terra cotta pots in which the plants are displayed and the Tenango de Doria embroidery applied honor the work’s cultural connections with craft traditions in Mexico.  Sculptures such as Platano (Carlos Calles) and Saguaro (Nora Oviedo) were completed during a special project called Space in Between in Houston as part of a collaboration with immigrant workers to share their stories and raise awareness about fair working conditions and immigrants’ rights.

Born in Monterrey, Cabrera was raised in Mexico City until her family moved to Salt Lake City when she was twelve. Four years later, Cabrera’s family relocated to El Paso, where the artist finished high school.  Cabrera earned both her Bachelor of Fine Arts and Master of Fine Arts degrees from Hunter College in the City University of New York.  The artist has been awarded several prestigious honors, including the Border Art Residency at La Union, New Mexico in 2000; a Joan Mitchell Foundation Grant in 2007; and the International Artist Residency Program at ArtPace, San Antonio, Texas in 2008.  Cabrera has had solo exhibitions at Finesilver Gallery, Houston; Walter Maciel Gallery, Los Angeles; Sara Meltzer Gallery, New York; Women and Their Work, Austin; the El Paso Museum of Art, the Southeastern Center for Contemporary Art (SECCA) in Winston-Salem, NC; and UC Riverside Sweeney Art Gallery, Riverside, CA.
The artist’s work is currently featured in a group exhibition titled Pop Departures at the Seattle Art Museum.