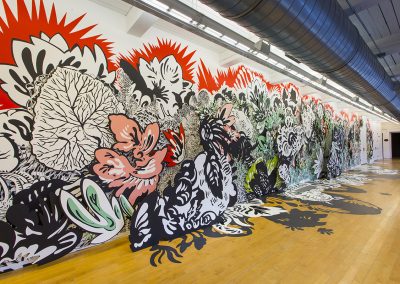 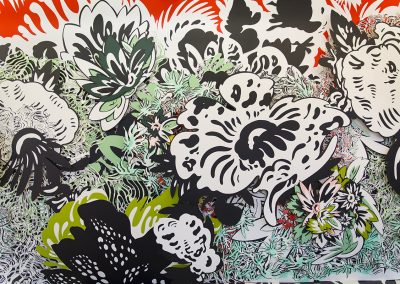 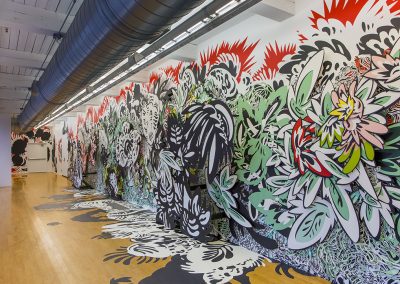 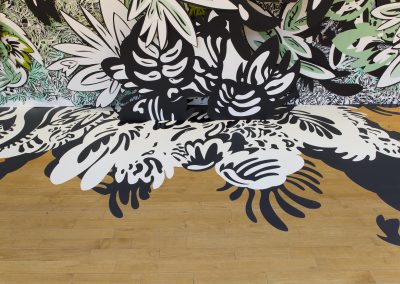 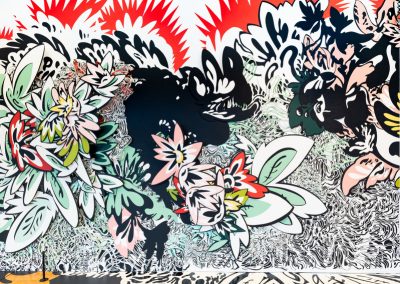 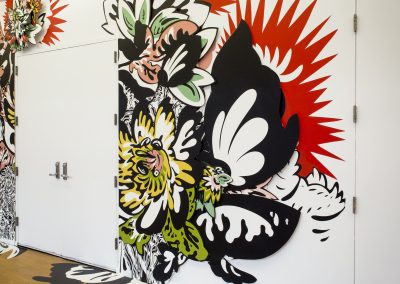 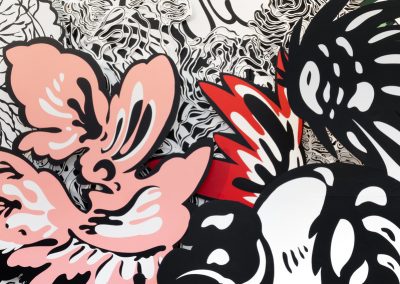 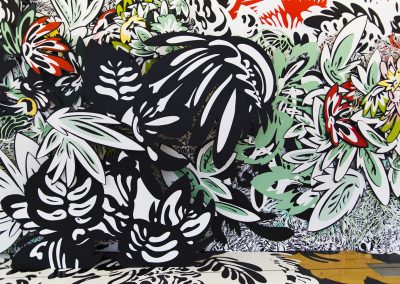 Bowdoin’s affinity for the wilderness began at a young age, as she wandered the woods and waters of Maine. This wasn’t solely a physical act; she also used books to understand the landscape around her and to escape to unavailable landscapes. Primed with an empirical and a fictional experience of nature, filled with wonder and terror, Bowdoin’s work flickers between unsentimental Darwinism and embroidered reverie. Her journeys into the dark woods hark to a time when fairy tales and scientific illustrations were equally plausible explanations of nature’s mysteries: where Ernst Haeckel, Lewis Carroll, or the Brothers Grimm might all make suitable traveling companions.

For MASS MoCA’s first-floor Hunter Hallway, Bowdoin’s ambitious Maneater grows to consume the space like a fruiting vine or an invasive species. As in all her work, the installation draws from many references, here ranging from pop culture ideas of nature and femininity to arcane literary traditions. The title of the installation conjures the Hall & Oates’ Maneater (1982), a cautionary tale about a wild woman who will seduce you, then “chew you up.” Equally applicable is Neko Case’s People Got a Lotta Nerve (2009), which chides humans for underestimating nature — cuddly until the moment it, too, bites you back. Bowdoin is also interested in the 19th-century literary genre called “the language of flowers,” which used botanical arrangements as encrypted messages, a specific meaning assigned to each flower. These threads evoke a world in which language and nature are intertwined and potentially out to get us if we aren’t careful.

In the lush paper thicket coiling its way down the Hunter Hallway, we see larger-than-life floral forms whose tranquility is undercut by carnivorous plants creeping and crawling across the gallery wall and floor. Subverting the traditional meanings ascribed to flowers — beauty, sentiment, delicacy, and femininity — Bowdoin gives the flowers back their thorns, reintroducing wildness and an unstoppable proliferation; her garden is overgrown, possibly toxic, but still seductive in its danger. Bowdoin gives nature its teeth back, and the flower — beautiful but a little too abundant — becomes a feminist gesture of fight and resistance. In her interlaced references and layered forms, Bowdoin leads us into the dense, more savage precincts of the natural world, where our place in the food chain is less secure: a terrain of tooth and claw, thorn and root.