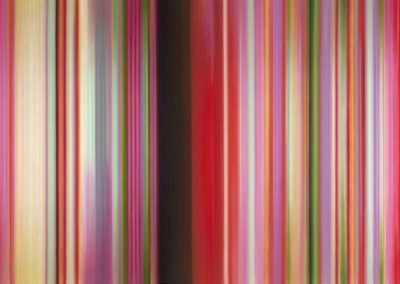 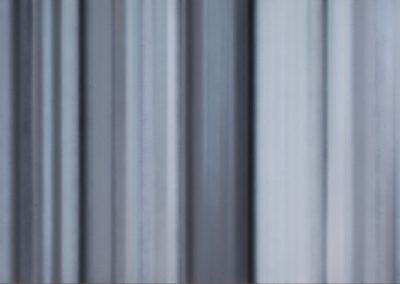 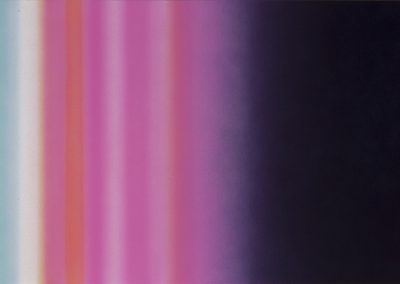 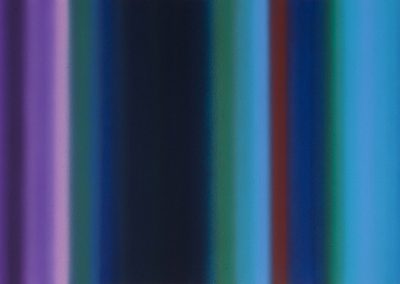 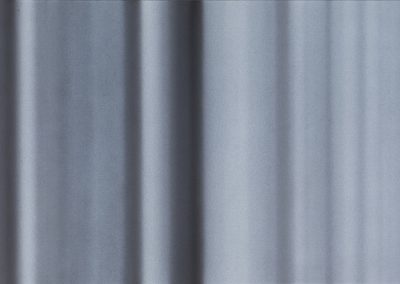 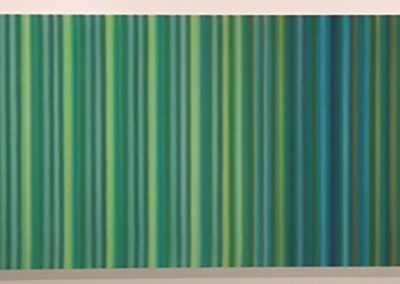 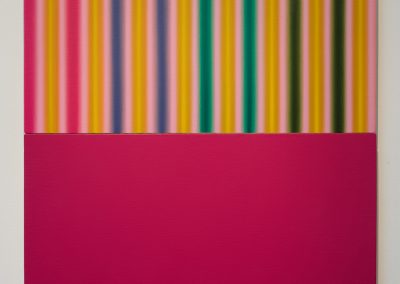 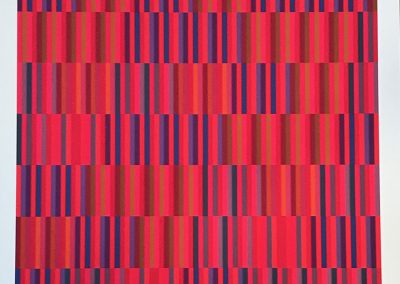 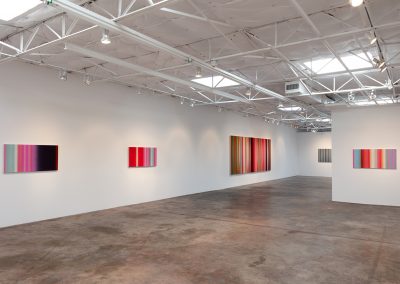 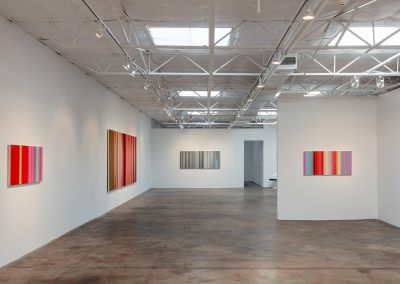 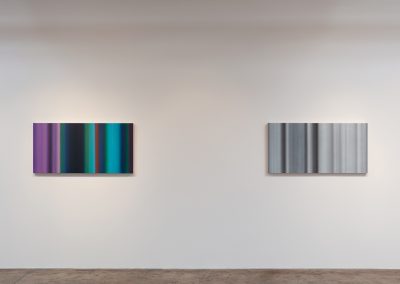 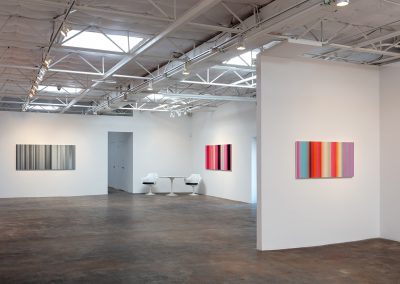 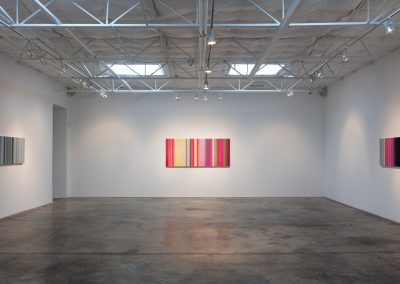 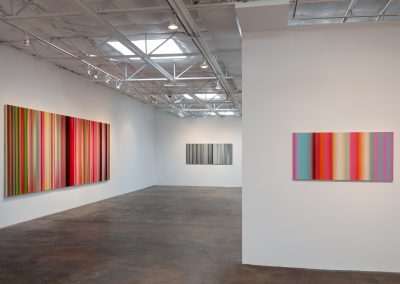 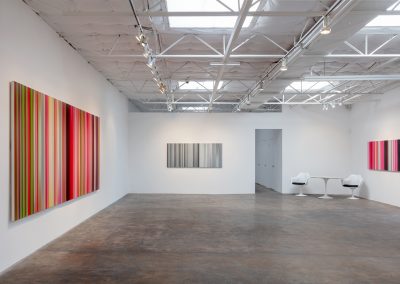 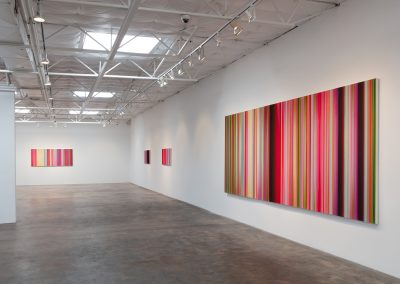 June 2, 2018 — Talley Dunn Gallery is pleased to announce an exhibition of recent work by British-born artist Tim Bavington. Tim Bavington: Blow – Up is the artist’s inaugural exhibition with the gallery and will open with a reception for the artist on Saturday, June 16th from 6:00 to 8:00 pm with artist remarks at 6:15 pm. The exhibition will be on view in the Main Gallery through July 28, 2018.

The exhibition features an installation of nine new abstract paintings that create an environment of visual intensity and pulsating color.  With these recent paintings, Bavington continues the practice for which he has received acclaim wherein he transforms sheet music into highly saturated abstract paintings that focus upon the subtleties and associations of color. Using synthetic polymer paint, Bavington acts as a translator between the aural and the visual as he turns guitar solos, melodies and basslines into vertical bands of color.  While Bavington has developed a method that designates sound to color and composition, the paintings are not literal translations.  Each painting remains open the artist’s intuition and decision making. Together these paintings play upon the nuances of one another with shifts between vibrant colors, the texture of individual canvases, the changing rhythms of different compositions, and the dynamic optical movement created as each painting is viewed from varying perspectives.

The exhibition’s title refers to Michelangelo Antonioni’s 1966 classic, groundbreaking thriller Blow-Up. Part art-film and studio-film, this legendary work, set in 1960s London, follows a fashion photographer who accidentally captured evidence of a murder in the background of one of his images. Unaware of having witnessed anything at first, he is prompted to see the hidden imagery in a process of blowing up portions of his photographs. That is, something invisible to a casual observer of a larger image comes to light though manipulating the scale of the image. Similarly, Bavington’s paintings in this exhibition relate to each other as examples of a working method seen at different magnifications. While all commanding in scale, the five smaller paintings in the exhibition appear to be zoomed-out versions of the show’s centerpiece,

Wah-Wah (blow up), which spans over fifteen feet in length.

Inspired by and named after the George Harrison song of the same title, Wah-Wah (blow-up), 2018, is a monumental tour-de-force. The impressive scale of the painting and Bavington’s manipulation of value within the bands of color create the illusion of light coming through the canvas.  Thus, the painting is a blown-up version of the compositions Bavington has become known for, but also hints at another possible meaning for the term: that of rupture and breaking-up. This is both harmonious with the illusion of “seeing through the cracks” and also with the history of the song itself. “Wah-Wah” was written following Harrison’s temporary departure from the Beatles in January 1969, and recorded shortly after the band’s break-up in 1970. Musically, the song is widely considered to be one of Harrison’s best solo efforts and is considered the closest composition to a hard rock song that the musician ever produced. Lyrically, it refers very directly to the conditions in which a “breaking-up” and “breaking-down” occurred between friends and bandmates. Culturally, the song was a window into the personal relationships that inspired (and continue to inspire) so much curiosity. In many ways, the song represents “seeing through the cracks,” and similar to Harrison’s song,  Bavington’s painting allows the viewer’s imagination to consider what lies on the other side.

Tim Bavington was born in England in 1966 and moved to the United States in 1984 to pursue his career in art. Bavington earned a bachelor’s degree at Art Center College of Design in Pasadena, California, and a Master’s in Fine Arts at University of Nevada, Las Vegas in 1990. While he is best known for his work in painting, Bavington has also explored large-scale sculptures, including a recent commission at Victory Park in Dallas. His work is part of collections at the Albright-Knox Art Gallery, Buffalo; Denver Art Museum; Honolulu Art Museum; McNay Art Museum, San Antonio; The Museum of Contemporary Art, San Diego; The Museum of Fine Arts, Houston; The Museum of Modern Art, New York; and the Portland Art Museum, Portland, Oregon. He has also received multiple GSA Art in Architecture Awards for his public commissions. Bavington currently lives in Las Vegas where he is an associate professor of art at the University of Nevada, Las Vegas.

Talley Dunn Gallery is open to the public Tuesday through Saturday from 10:00 a.m. to 5:00 p.m. and by appointment. For more information about the exhibition, please contact Meredith Leyendecker at the gallery (meredith@talleydunn.com or 214-521-9898) for visuals and a checklist. Concurrently with this exhibition, War Garden: United States of America, 1917-2017, an exhibition of work by Cynthia Mulcahy, will be on view in the Project Gallery.