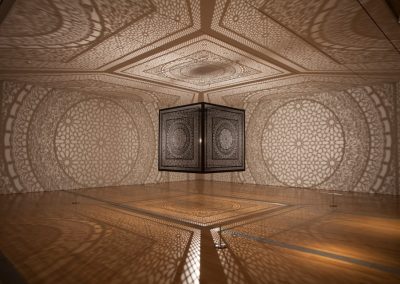 GRAM presents concurrent solo exhibitions featuring Anila Quayyum Agha (Pakistani-American) and Monir Shahroudy Farmanfarmaian (Iranian), both of whom synthesize Islamic tradition and modern abstraction into objects of great beauty and depth. The two women have immersed themselves in the distinctive geometric forms and designs of traditional Islamic cultures, which are seen in architecture and ornamentation throughout the Islamic world. Farmanfarmaian and Agha are fluent, too, in the language of 20th century Western abstract art. With feet in two worlds, both deftly integrate their diverse modes and influences into uniquely personal art.

Anila Quayyum Agha’s Intersections is an immersive gallery installation centered around a suspended cube. Each of the cube’s six sides are laser cut with the same delicate patterns, derived from decorative motifs found in Spain’s historic Alhambra, an international highlight of traditional Islamic architecture and design. A single light bulb within the cube casts shadows of interlacing patterns onto the room’s walls, ceiling, and floor–and subsequently the people within the space. In contrast to the artist’s childhood experience of being excluded from mosques because she was female, with Intersections, Agha creates a public space open to all.

Anila Quayyum Agha was born in Lahore, Pakistan in 1965. She holds a BFA from the National College of Art in Lahore, Pakistan and an MFA from the University of North Texas, Denton. She is an Associate Professor at the Herron School of Art and Design in Indianapolis, Indiana. Intersections won multiple awards in ArtPrize 2014, when it was first exhibited at the Grand Rapids Art Museum.