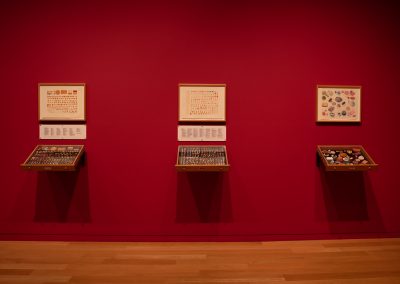 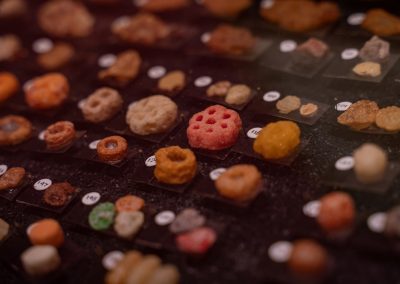 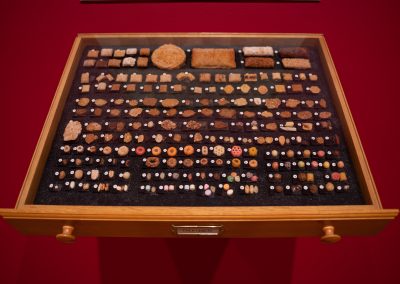 The Modern Art Museum of Fort Worth presents Julie Bozzi’s American Food, 1980–92, acquired by the museum for the permanent collection in 2019. Bozzi’s sculptural installation consists of an oak cabinet with 13 drawers, 12 of which contain miniature reproductions of American food products, each carefully handmade by the artist and displayed under glass, like scientific specimens from a natural history museum. The food items are categorized into distinct genres, including cereals, snack cakes, and breakfast meats, which are indexed in the 13th drawer. In the exhibition, the 12 drawers containing the food models are mounted on the wall and paired with framed drawings that act as graphic keys to their contents.

Bozzi, a longtime resident of Fort Worth, began her research for American Food in 1975 and created the work between 1980 and 1992. The miniature food facsimiles, meticulously crafted from wood, plaster, clay, paint, and other materials, represent standardized commercial American food products, from donuts to Ding-Dongs, along with “Americanized” versions of ethnic cuisines. Working in the pre-internet era, Bozzi conducted her research using methods akin to an anthropologist or explorer, collecting source material from menus, grocery stores, food stands, advertisements, and oral interviews during cross-country road trips.

Like the landscape paintings Bozzi is also known for, American Food addresses the vernacular American experience. The installation combines aspects of Pop art, postmodernism, still life, and Americana, while underscoring the universal human impulse to collect and categorize. More than twenty years after its making, the work endures as a witty and visually engaging statement about American consumerism and its culture of abundance.

American Food was originally organized by the Museum of Contemporary Art San Diego in 1992 and traveled to the Modern in 1993 as part of a national tour.